Making Camel Tracks in the Desert 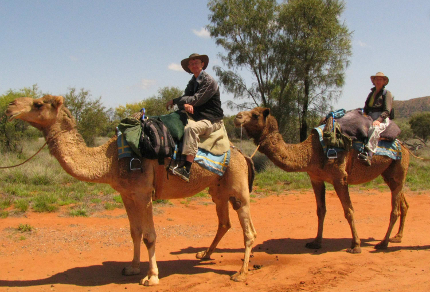 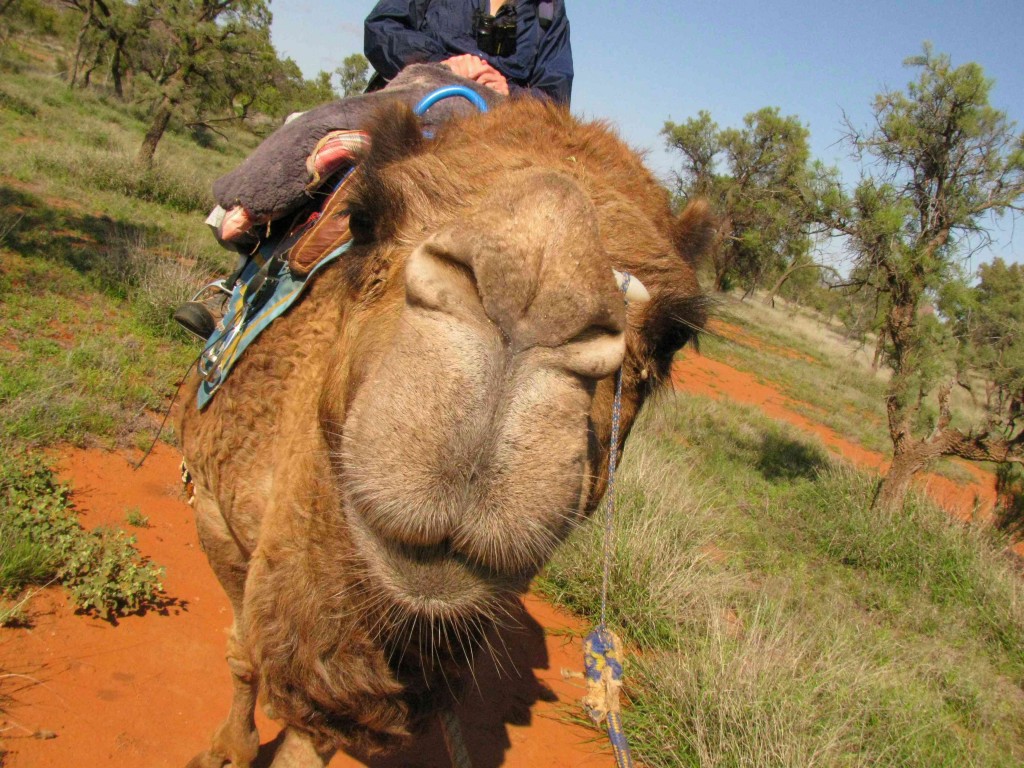 Taking photographs from the back of a camel is no easy task, as Vilis discovered this morning when he and I toured the desert south of Alice Springs by camel. I discovered that focusing binoculars from the back of a camel is impossible due to the regular lurches accompanying a camel’s steps. So I birded with my bald eyeballs, and Vilis snapped running shots at intriguing angles, or managed to capture a few horizontally-aligned shots during the infrequent pauses in our 3-hour ride.

Our guide for the tour was Marcus Williams, owner of Pyndan Camel Tracks, who nodded a greeting to us on our arrival and pointed me to a camel folded into a resting postion on the ground. I climbed into a saddle set on the rear of the camel’s hump and slipped my shoes into stirrups. “Hold on tight and lean back,” Mr. Williams instructed, before quietly commanding the camel to rise. It did his bidding, and I found myself sitting a long way from the ground. A minute later, Vilis did, too. “This is Ruby.” Our guide pointed to my camel. “And that’s Greydog [behind me].” He pointed to Vilis’s camel. “That’s Doc.” 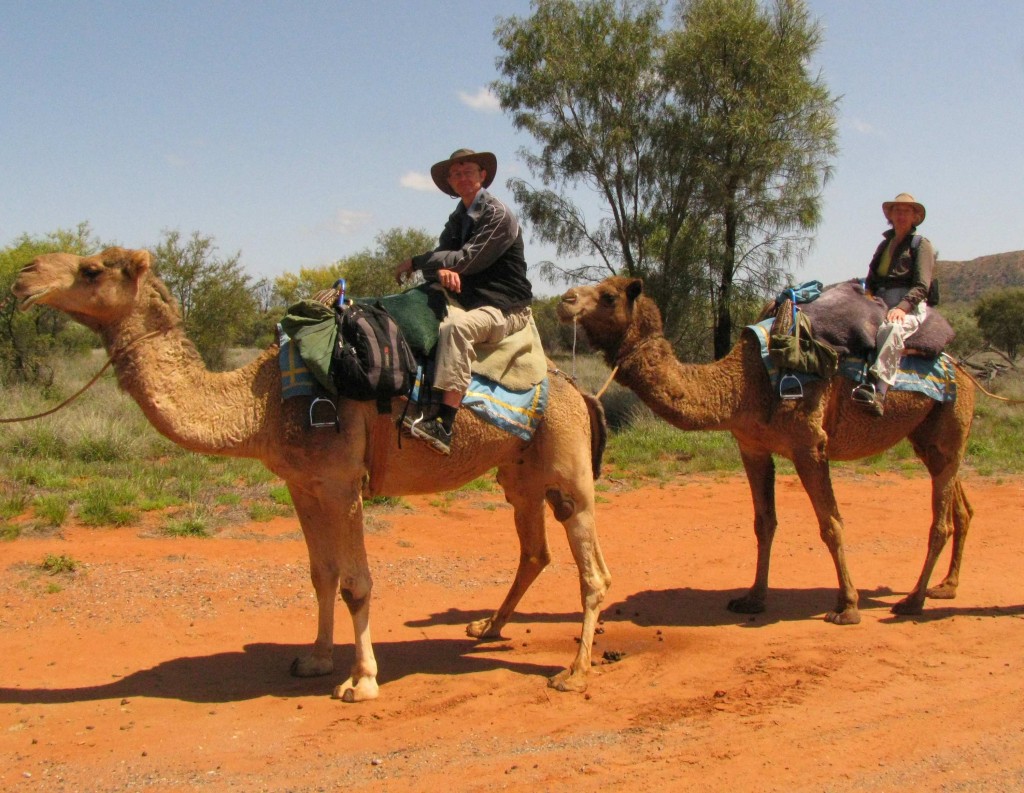 That’s Doc Vilis is riding, and I’m on Ruby (photo by Marcus Williams)

From the corrals and yard, shaded by tall shade trees visited by galahs, western ringnecks, magpie-larks, and yellow-throated miners, we headed out onto a sandy plain. The camels were roped together into a line of five, although Vilis and I were the only guests. Vilis rode behind our guide, who was a man of few words. Fifteen minutes after we began our ride, a question seemed wrung from him, and after Vilis responded, a full ten minutes passed before another quietly-voiced question appeared out of nowhere, following on Vilis’s earlier comment. 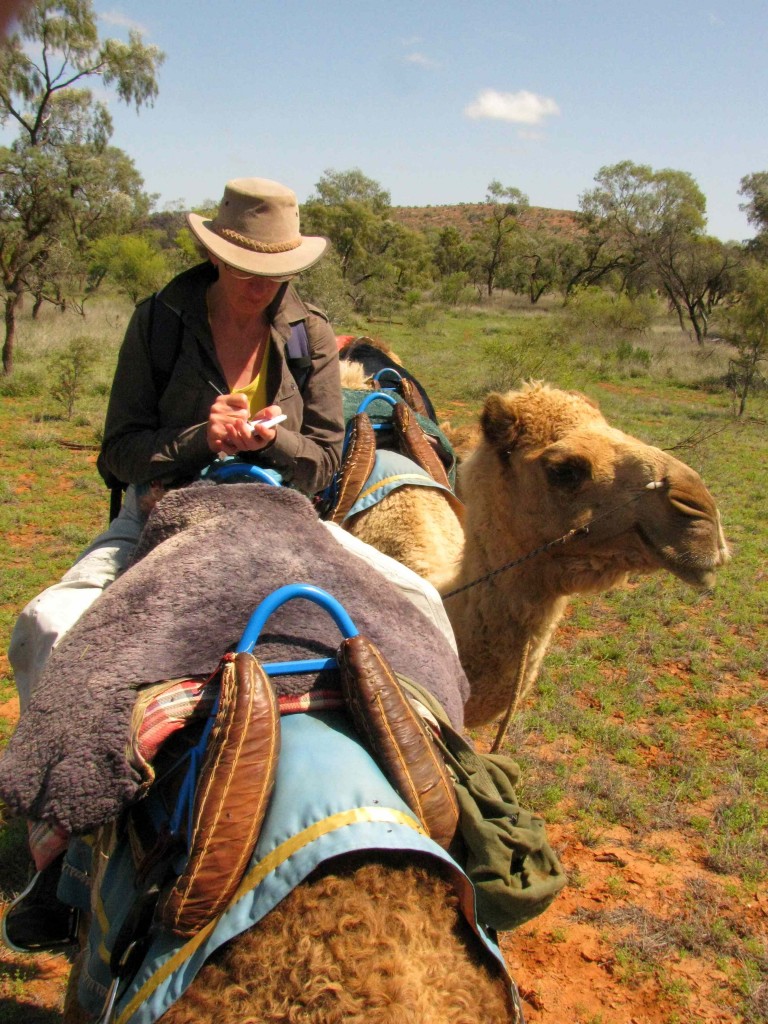 Here I’m on Ruby, with Greydog behind me. (© Vilis Nams)

If I had to choose a word to describe the ride, it would be peaceful. My saddle was comfortable, the morning was cool, and a fresh breeze washed us with clean, desert air and had us occasionally holding onto our hats. The camels trod the red sand slowly and silently, their feet broad, soft platters of flesh that squished out into cushioning pads to absorb their weight with each step. Flocks of emerald-and-lemon budgies raced over the plain, a kestrel hovered in the sky, cockatiels flew past us, and red-eyed diamond doves cooed with scratchy voices. Male rufous songlarks poured all of their mating desire into bursts of tinkling song emitted during rapid-wingbeat flights. Our guide pointed out a red kangaroo propped upright on its haunches and tail, watching us as we rode through a pasture toward gently rolling hills. 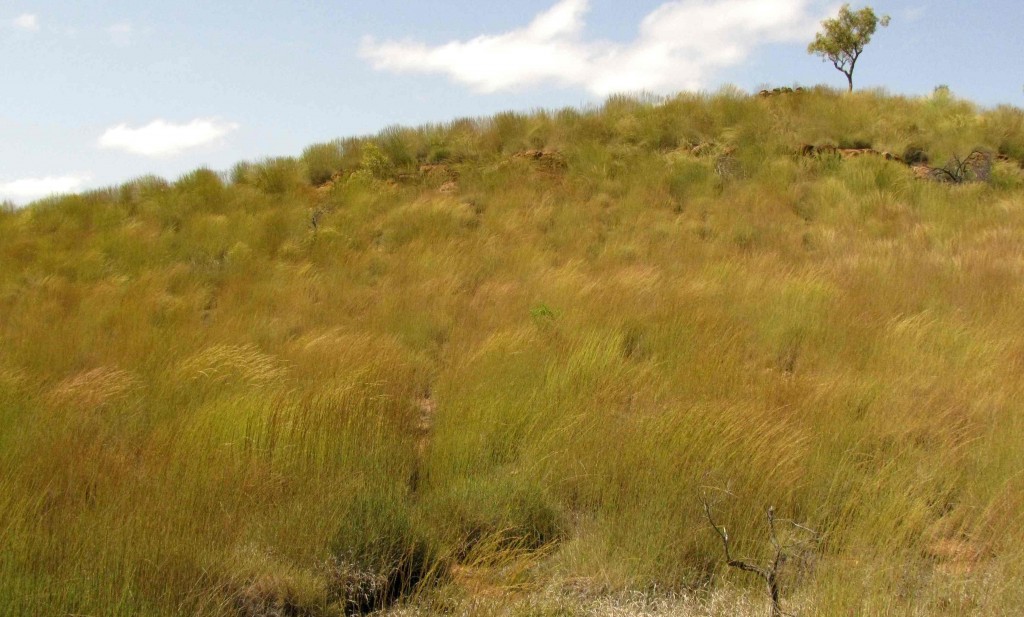 On reaching the hills, we wound our way through acacia-speckled grasslands between spinifex-cloaked slopes. Sleek red and black beef cattle fattened on the lush growth of grasses romped toward us and mock-charging us in challenge. Ignoring them, we continued on through spinifex grassland interrupted by stunted gum trees. The spinifex formed dense clumps topped with tall flowering stalks bearing seeds and waving gracefully in the wind like some desert sea. From atop Ruby’s hump, I reached out and allowed spinifex seed heads to brush against my hand, this action bringing home to me just how tall the grasses had grown. 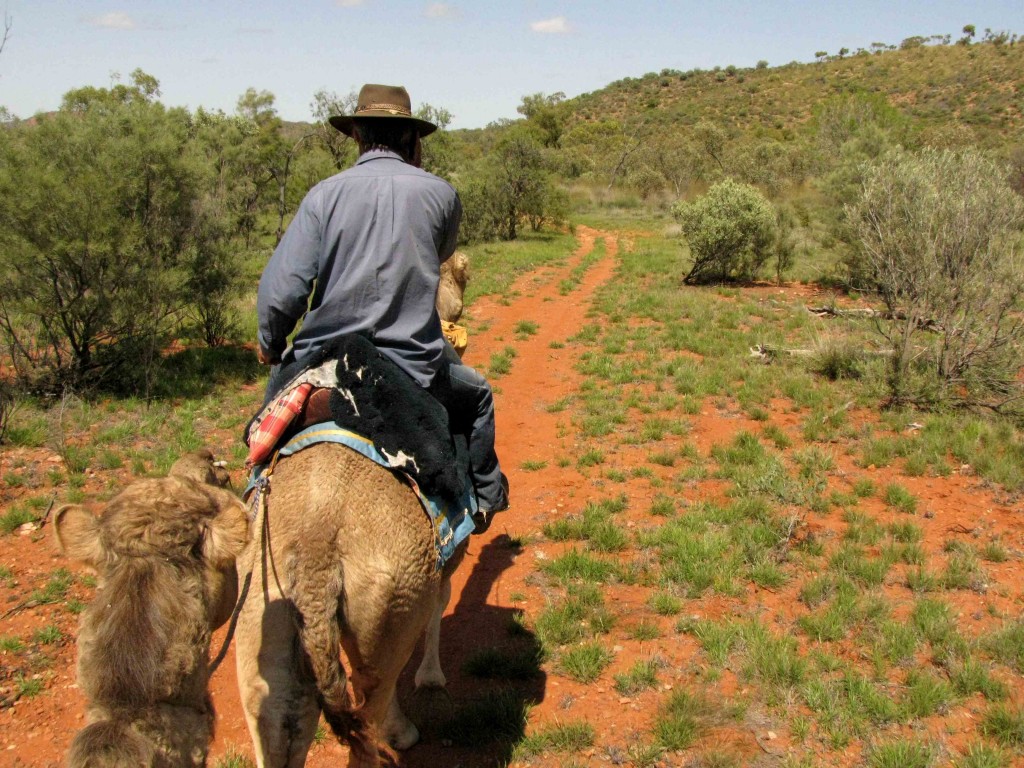 Cell Phones Ring Even  in the Desert (© Vilis Nams)

Several times during our ride, Ruby showed a bratty side. She reached out to grab mouthfuls of shrub leaves and then rubbed her body and mine against the thorny branches, leaving me with a nice collection of scratches on my shins. The slow, quiet atmosphere of our ride was also periodically interrupted by the peremptory jingle of our guide’s cell phone, which sounded utterly incongruent given our surroundings, but was undoubtedly necessary to accept bookings for tours. 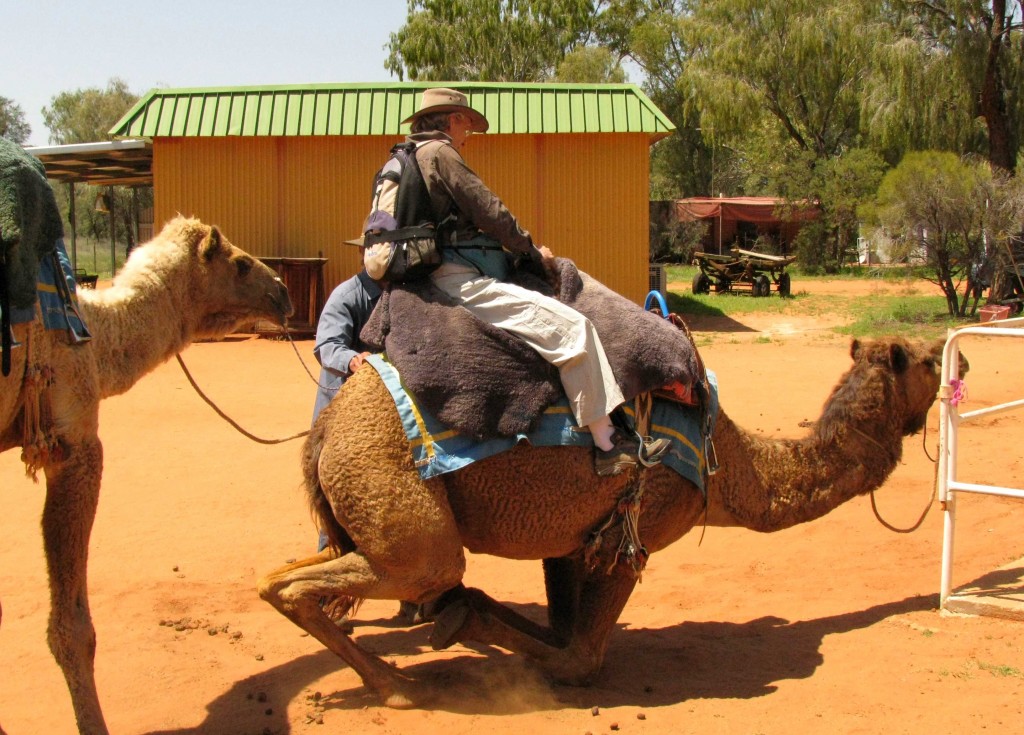 Just before noon, we returned to the corral, Vilis’s and my lateral knee ligaments screaming from the unaccustomed strain imposed by hours of wrapping our legs around the broad barrels of camels. We limped off the pain and discovered an unexpected chattiness in our guide when it came to the topic of feral camels, which he felt are much more adapted to the desert landscape and easier on the environment than the tens of millions of hoofed livestock – cattle and sheep, in particular – also introduced to this continent by Europeans. He suggested that environmentalists (“They’re mostly white fellas. They’ve got no real connection with the land.”) who want to cull feral camels should also consider removing all the sheep, cattle, and other animals Europeans have introduced, including themselves. 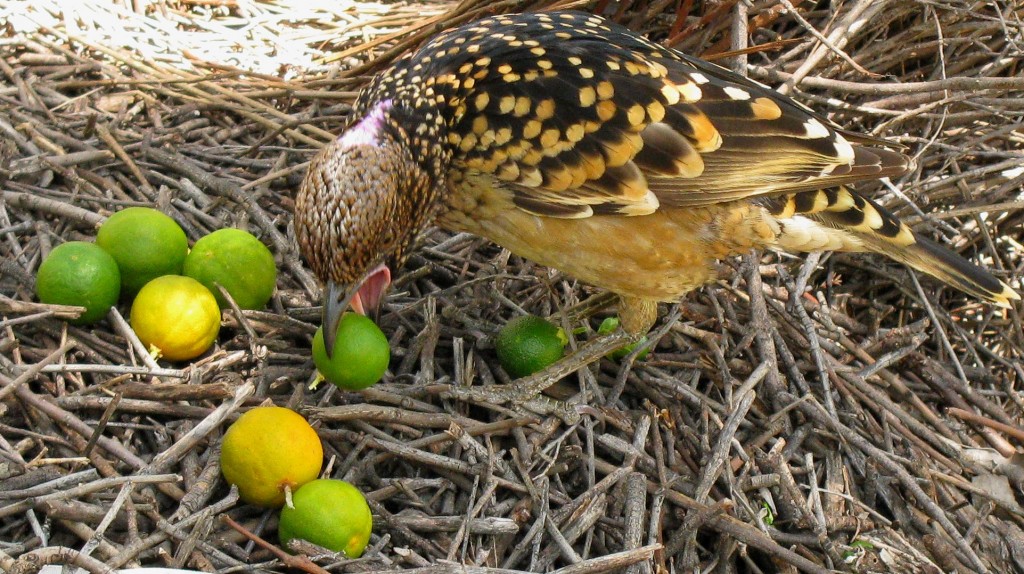 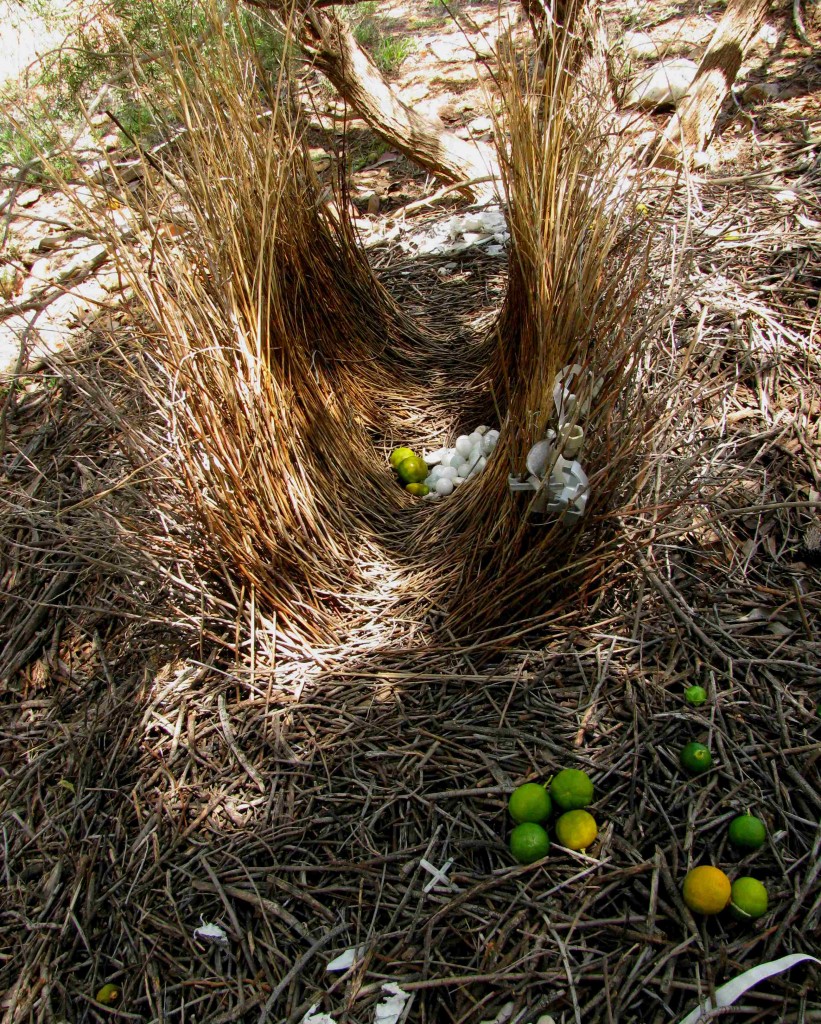 Returning to Alice Springs, we lunched on meat pies and baked sweets in the Olive Pink Botanic Garden, a male western bowerbird near our picnic table hissing from his bower decorated with white marbles, grey clothespins, bleached bones, white bits of paper and plastic, and green and yellow fruits. The garden itself, which reflected desert vegetation types such as mulga woodland and sand communities, appeared short and sparse in comparison with the lush, tropical botanic gardens of Townsville (vegetation is a product of climate, after all), yet provided habitat for a variety of birds, including white-plumed honeyeaters, diamond doves, zebra finches, and western ringnecks.

Following lunch, we checked into a caravan park, rested, and in late afternoon wandered across the Stuart Highway and into the Alice Springs Telegraph Station Historical Reserve, an expanse of garbage-littered sandy riverbed grassland and gums bordered by a slope of red granite boulders. (We didn’t get to the historical buildings.) There, galahs and ringnecks painted bright colours against the sand, rock, and gums. A female grey butcherbird carried food to her young in a nest attached to a eucalypt branch, and a single gum tree fairly vibrated with the activity and calls of a kestrel, several ringnecks, two galahs, and a number of yellow-throated miners. A ghost gum situated at the edge of the boulder outcrops splayed pale, lovely branches against the darkening sky of our last evening in the Red Centre. 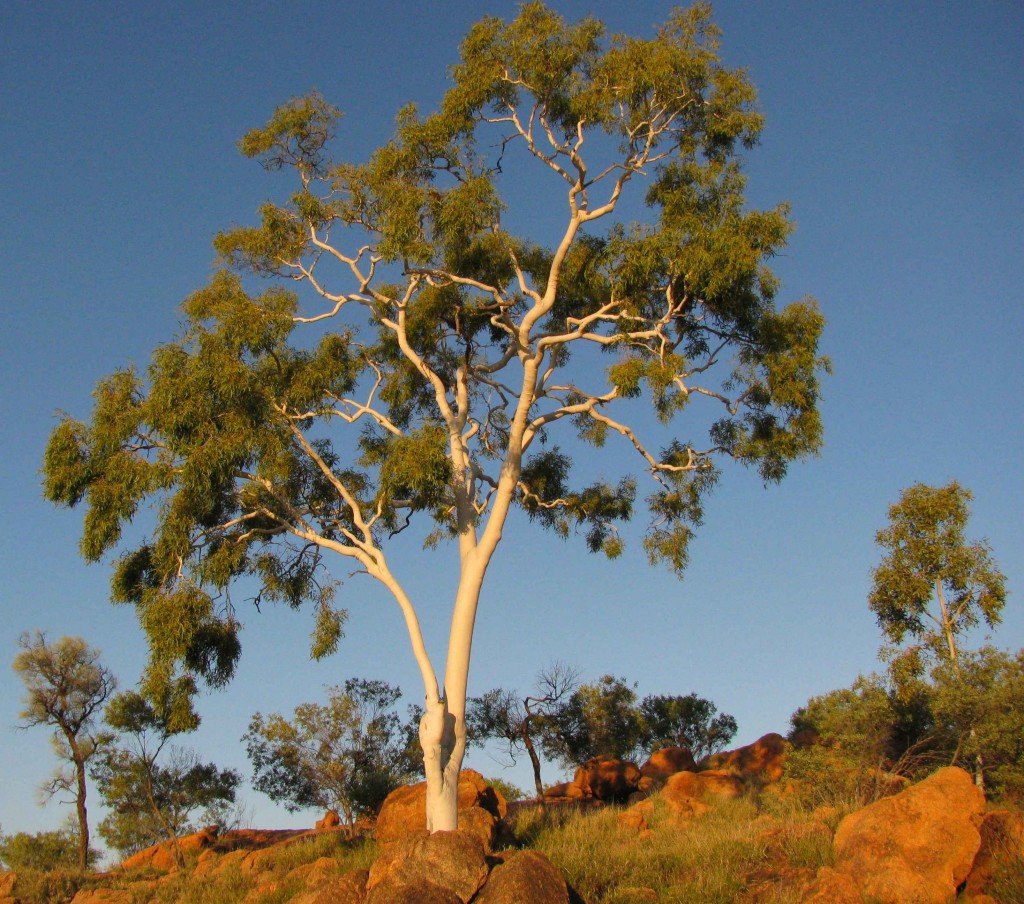 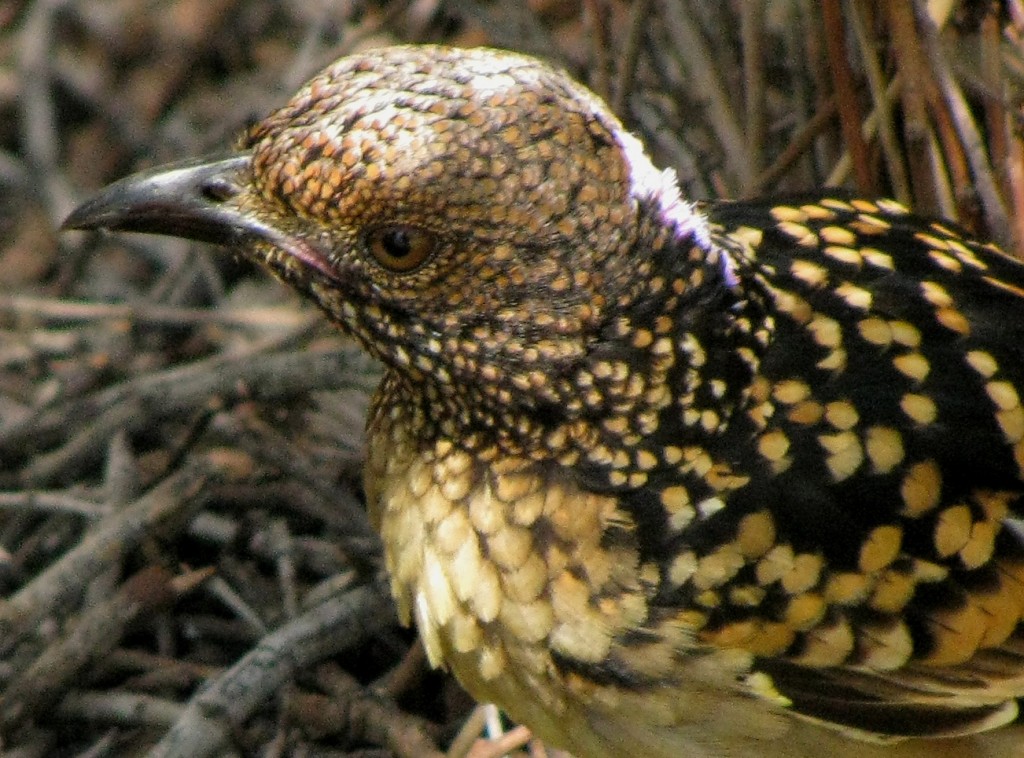