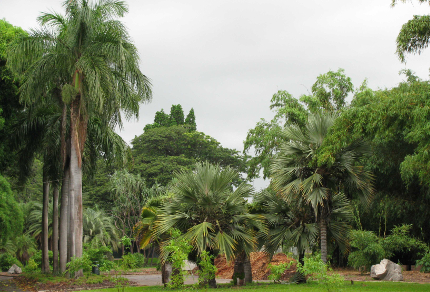 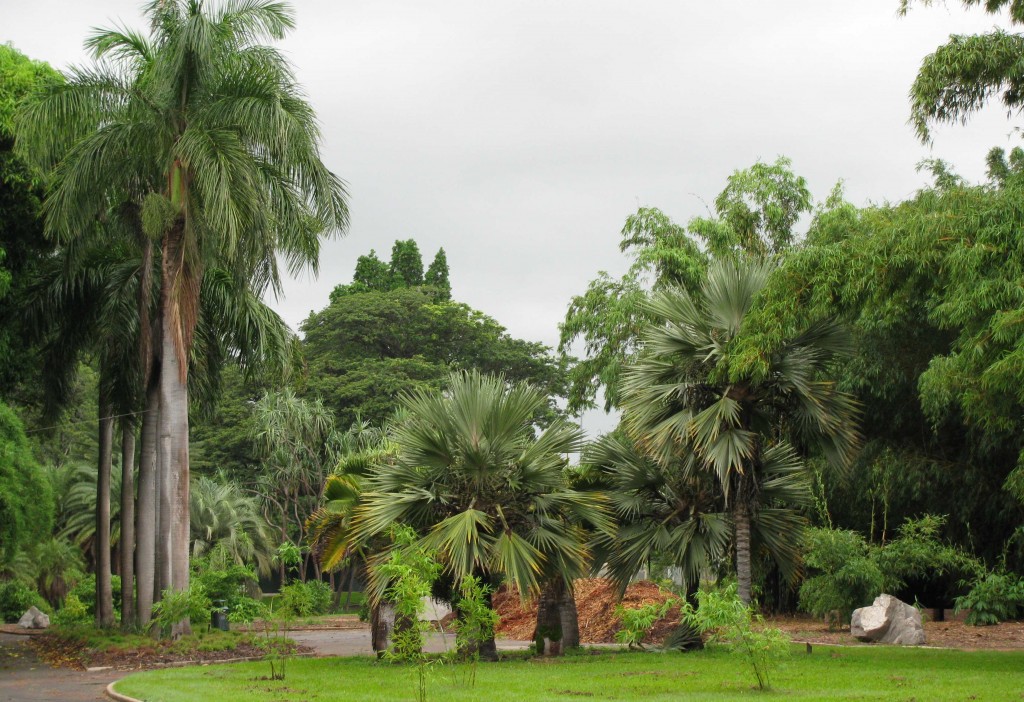 At 6:45 a.m., when I entered the Anderson Park Botanical Gardens, I was greeted by a view of massive clumps of bamboo and a stately row of palms which led my eyes to a curving pond. Pacific black ducks floated on the pond and preened onshore, one of the latter with an extended wing displaying the bird’s iridescent green speculum. A dusky moorhen picked its way back and forth through emergent vegetation in shallow water, its red facial shield brilliant in the sunlight and contrasting sharply with the waterhen’s dark brown plumage. In a tree near the pond’s edge, a little black cormorant basked in the sun’s warmth, its throat fluttering with a regular pulse. The early, angled sunlight seemed to feature every detail of these birds’ appearances and made it easy to spot the dramatic white and black of pied imperial-pigeons and magpie-larks also basking in trees, and of a magpie-goose in flight. Rainbow lorikeets raced from tree to tree like winged jewels, and a brood of ducklings skittered down the gentle slope behind the pond and into the water, leaving V-wakes on the glistening surface.

I strolled through a grove of date palms with thick heads of fronds arcing upward from stubby trunks. Then I wended my way through the cycad gardens, accompanied by the mournful laments of magpies and soothing coos of peaceful doves. All of the cycads in the African and Asian section of the gardens possessed long, curved, pinnate leaves which, like those of the dates, arced upward from thick, stubby trunks. The leaflets comprising the cycad fronds differed among species, one having prickly, scalloped leaflets that reminded me of holly, another possessing thin, drooping leaflets, and yet another having firm, robust leaflets with toothed edges.

In the Australian section of the garden, I strolled among 15 or so of Australia’s 69 cycad species,1 some dwarf, blue-fronded varieties, others with dark green, 2-metre fronds having leaflets like dark green stillettos. Australia’s native cycads inhabit two distinct regions of the country –  the southwest knob of Western Australia, and a band of subtropical and tropical vegetation following Australia’s entire east coast and over the top of Queensland westward to the northernmost reaches of the Northern Territory.2 All cycads are representatives of a group of plants that has survived since the time of the dinosaurs.2 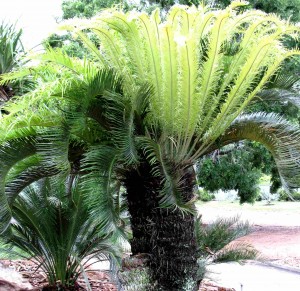 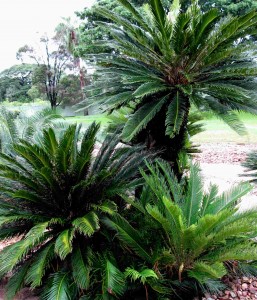 Leaving the cycads, I wandered through the tropical orchard that featured rose apples, pummelos, mabolos, and grapefruits, the scent of citrus pervading the air. After that, I passed tall, spreading tamarinds and eucalypts.

A male sunbird flitted among the branches of the trees, his belly gloriously yellow below his olive back, blue-black throat and long, curved, black bill. Young figbirds and spangled drongos called out to parents for food, and a magpie-lark visited its bowl-shaped nest of mud attached to a low, dangling branch of a lacy-leaved tree. In a nearby section of drowned lawn, plumed whistling ducks squeaked and rested near four bush stone-curlews or ‘thick-knees’ that stood motionless as they observed me – again, the skulking private investigators.

Pestered by mosquitoes and ants, I soon headed for the gardens’ exit, only to be stopped in my tracks by a picture of elegant solicitude – an adult royal spoonbill watching over two immature birds as they fed by skimming their broad, black, spoon-shaped bills back and forth in standing water. The adult was gorgeous – absolutely white except for its black bill and legs, a small red mark on its forehead, and yellow ‘eye shadow’ above each eye. A waterfall of white head-plumes extended downward from the back of its head, like a veil worn above a wedding dress and long black stockings. When I walked on, a kookaburra broke into loud, coarse laughter, as though berating my romantic impressions.

In late afternoon, when Vilis arrived home from work, he grinned and told me, “So, apparently I’m giving the other men in the department a bad name.”

“I cleaned up my coffee mess myself.”

That comment referred to his having taken a container of instant coffee to work on his bike yesterday, only to find on his arrival that the container had opened en route. The result was a daypack interior liberally dusted with powdered coffee. Fortunately, the janitor, Lee, had a vacuum Vilis was able to use to suck up the errant particles.

“Lee was so surprised I did it myself that she mentioned it to several other men in the department, and they told her that I was going to give them a bad name.”

“Meaning they would have got her to do it.”

Then my husband told me that it was Lee who had laundered the bedding he and I had slept on at Richard’s house, after she learned that we would be staying there.