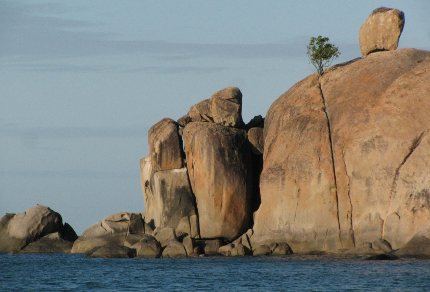 In mid-morning, Vilis parked the Kia in the SunFerries parking lot in Townsville, and we hoisted our backpacks onto our shoulders to set off for a long weekend exploration of Magnetic Island. The 20-minute ferry trip under brilliant blue skies carried us over opaque green water away from Townsville’s port district, with its sheltered marina and exposed docks facilitating cargo transfer of container ships piled with stacks of red, blue, and green containers. Offshore, a queue of ships waiting to be piloted into port waited, well-spaced, their orderly presence evidence of Townsville’s significance as a North Queensland port.

As the ferry passed the jetty at Picnic Bay and approached its berth in Nelly Bay, Magnetic Island revealed itself as hills and ridges comprised of piles of jumbled, gigantic granite boulders, many larger than houses. Hoop pines with their distinctive curved, upward-sweeping branches and thick, awl-like leaves protruded from amongst the boulders like coniferous bottlebrushes, while eucalypts and other trees kept a lower profile, softening the barren, rugged contours of the rocky peaks. On our arrival in port, I scanned the breakwater beach for birds, spotting only an Australian pied oystercatcher and reef egret to add to my sighting of a crested tern while on the ferry.

Feeling the freedom of hopping on a bus with nothing more than a pack on our backs, we stood in the aisle and swayed and braced while the bus alternately accelerated and braked its way around tight curves and over steep inclines en route to Horseshoe Bay on the island’s north coast. Primarily filled with casually-dressed young people in their twenties and carrying packs, the bus exuded an atmosphere of adventure. At our destination of Bungalow Bay Resort – Koala Village, we edged our way through the crowded bus, aided by other passengers who good-naturedly helped us hoist our packs or stepped off the bus to allow us clear passage. 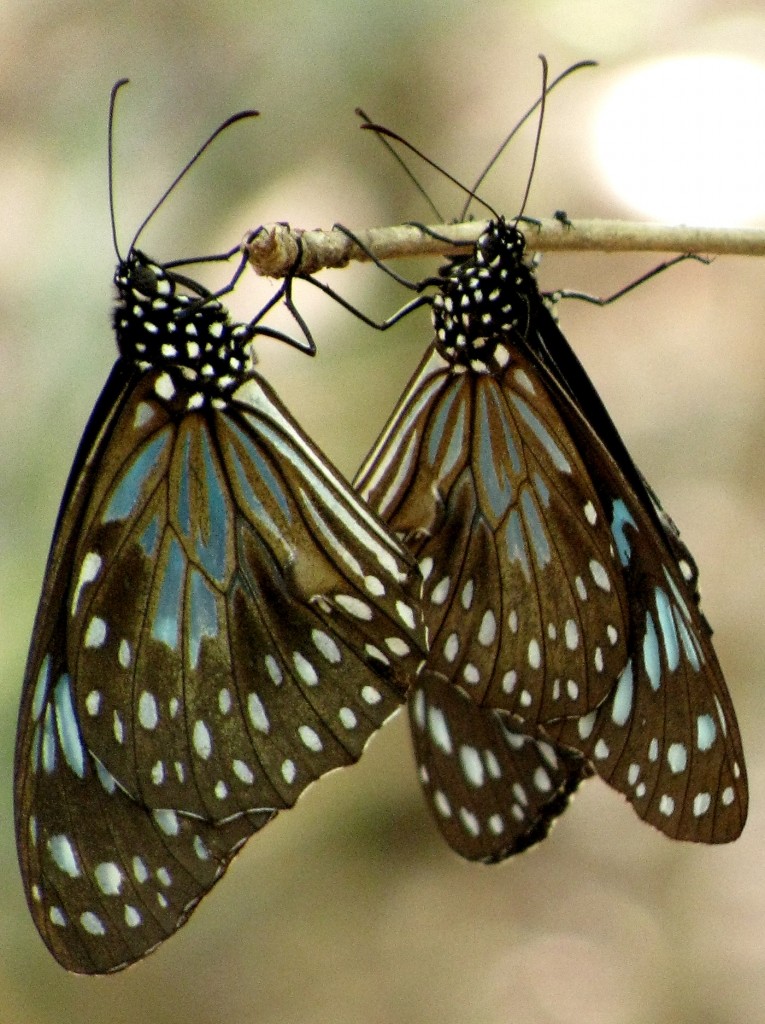 After erecting our tent in a corner of the open, grassy campground in the award-winning eco-resort, we explored nearby trails, spotting blue tiger and varied eggfly butterflies. In shady, paperbark-dominated woodland featuring palms and pandanus, traveller’s palms and bamboo, the tigers were everywhere. They wafted like streaks of pale, dark-edged blue through the air on silent wings and hung like bats in clusters from twigs. Hundreds fluttered around Vilis in dappled sunlight while he photographed them. Each step he took sent additional hundreds, perhaps thousands, flying like ashes tossed into the air by wind. Everywhere I looked, I saw more. In a scene unlike any I had before experienced, silent, fluttering butterflies flew like millions of erratic shadows or miniature, blue-flecked bats among the paperbarks, palms, and dense understory trees. I told myself that even if the rest of the weekend was a bust, our trip to the island would have been worth it simply to be surrounded by those silent clouds of beauty. 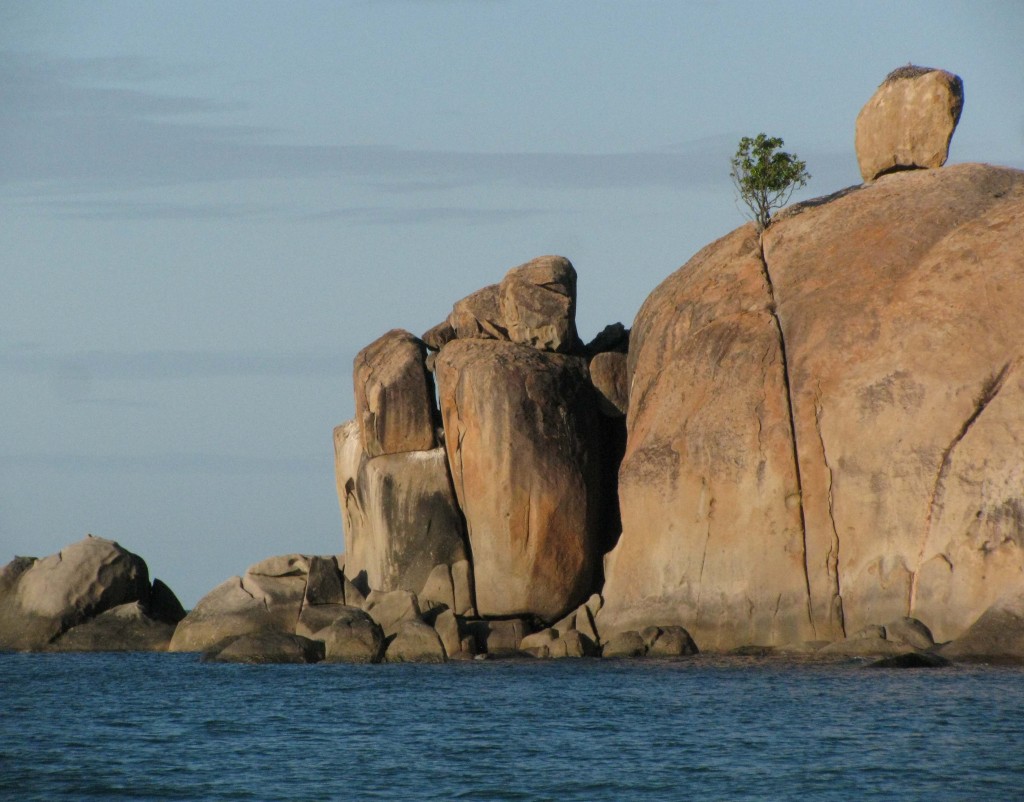 Later in the afternoon, when the day’s heat eased, we hiked from the long, pale crescent of Horseshoe Bay beach, where swimmers splashed in a marked rectangle of water and graceful sailboats lay anchored beyond them, up and over one of the island’s hills of jumbled boulders to Balding Bay. There, sunbathers and swimmers enjoyed a secluded beach in the buff, and granite headlands had me yearning to pick up a paintbrush, the rocks lit by the warm light of the setting sun.

In waning light, we retraced our steps, wading through a tidal creek entering Horseshoe Bay, and then rubbing shoulders with young travellers while we prepared our supper in the camp kitchen. International accents flowed around us as we ate on an open patio, the nearby ‘what’s-your-country-like’ conversation of two young men – one an Israeli and one a German – filling me with hope for the world. A bush stone-curlew on long stick-legs peered around a tree near the kitchen door, and a female brushtail possum with a bulging pouch lurched and waddled between patio tables into the kitchen, climbed into a garbage container, and gorged on backpackers’ leftovers. 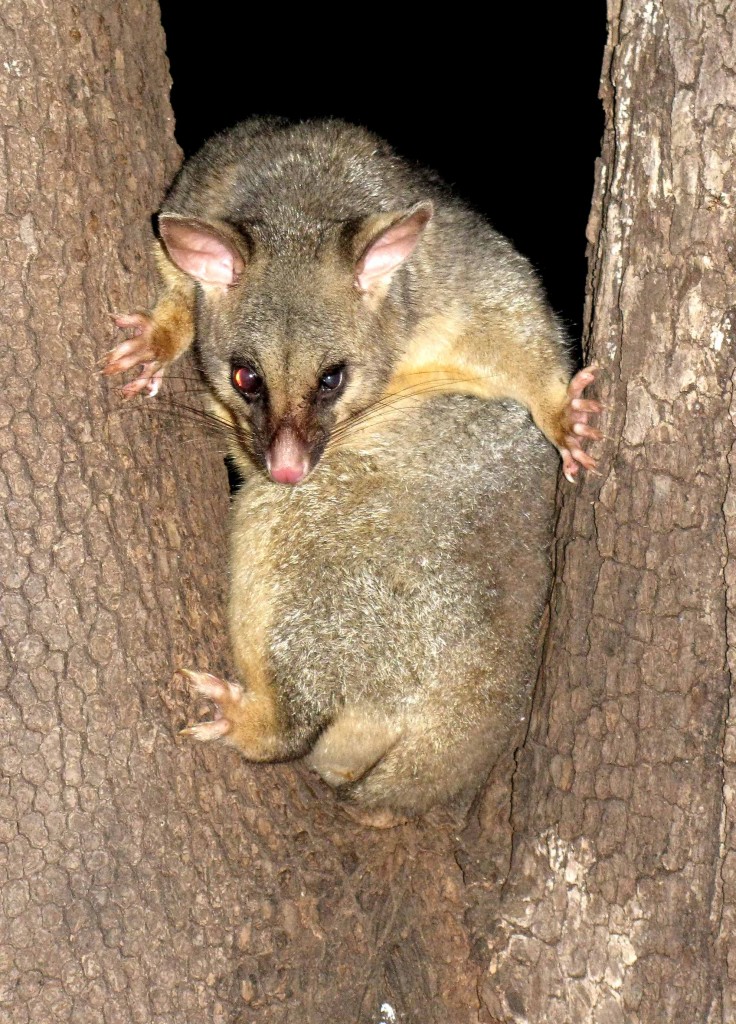