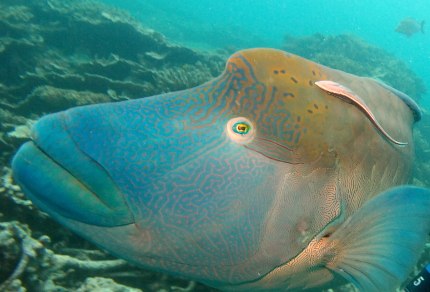 At 8:30 a.m., Vilis and I boarded Reef Magic’s high-speed catamaran, which transported us 45 kilometres away from Cairns to Moore Reef on the outer Great Barrier Reef. The catamaran pounded over ocean swells for 90 minutes before docking at Reef Magic’s stationary Marine World pontoon, where five hours of reef exploration awaited us. From the ocean surface, all we saw were blue waves, yet the moment we immersed snorkelling masks in the water, the exquisite intricacies of the Great Barrier Reef materialized below us, jolting us with awe and delight. 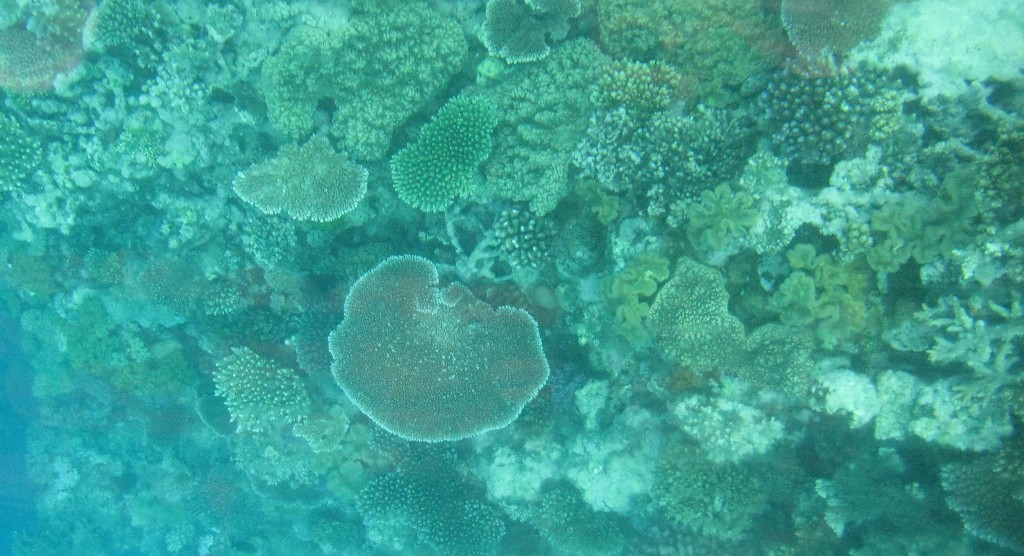 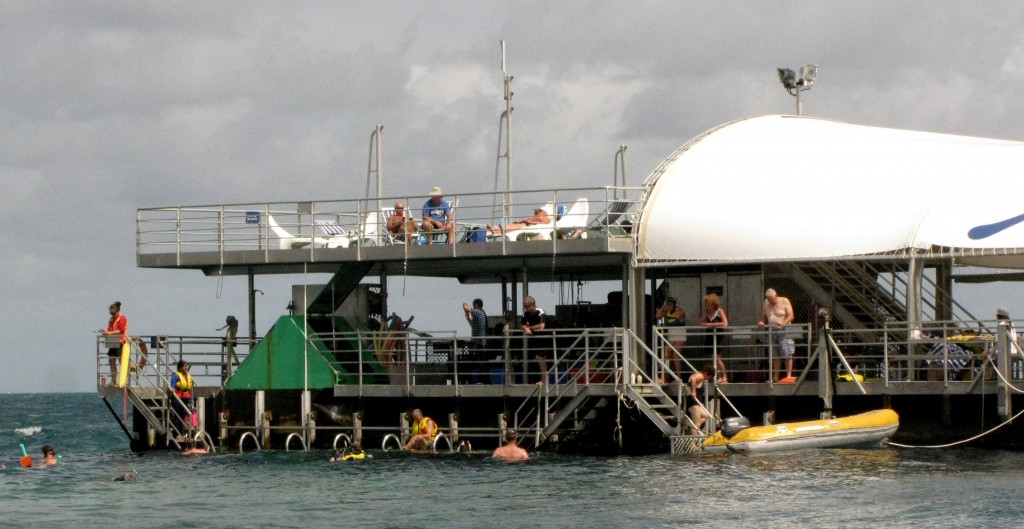 From the pontoon’s snorkelling deck, Vilis and I joined the tour’s naturalist Eric and another snorkeller for a half-hour introduction to the reef. Eric explained that the assemblages of corals are called coral gardens, and pointed out coral varieties named for their resemblances to other, familiar objects – flat plate corals that become table corals as they increase in size; branching staghorn corals, some possessing bright blue coral polyps; rounded boulder corals; mushroom corals possessing skeletons like the radiating gills on the underside of a cap mushroom; brain corals with their curving lines of polyps resembling the folds of a human brain; wrinkled, velvety-looking elephant-ear corals. These are all hard corals possessing limestone skeletons, the staghorns the fastest-growing, at about 25 centimetres per year, and the boulders the slowest-growing, at only 1 centimetre per year. Eric also pointed out two varieties of soft corals (no skeleton, but limestone spicules in tissues) waving in the ocean currents – long, pinky-brown spaghetti coral and shorter finger coral. 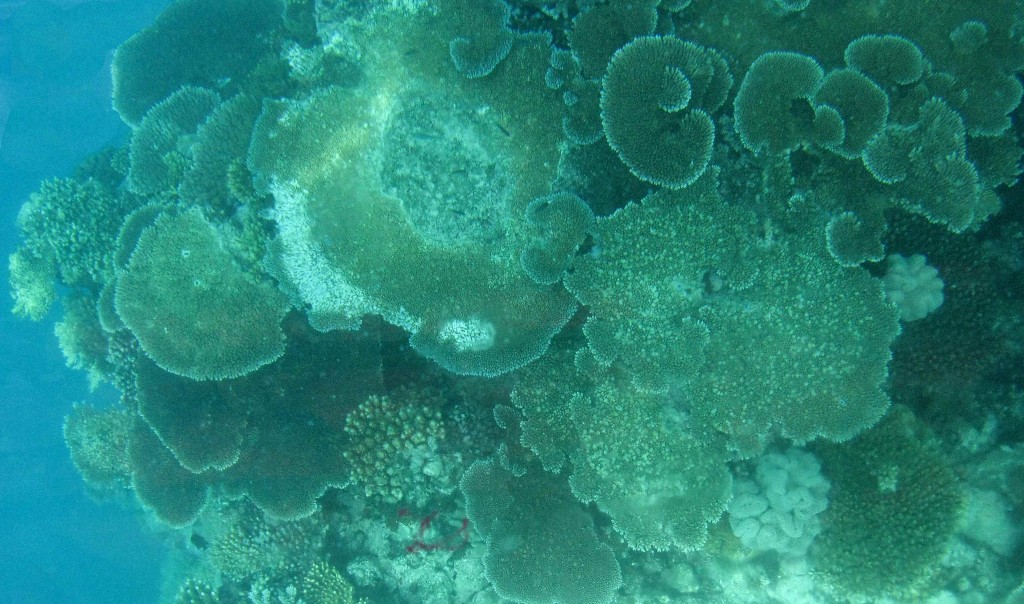 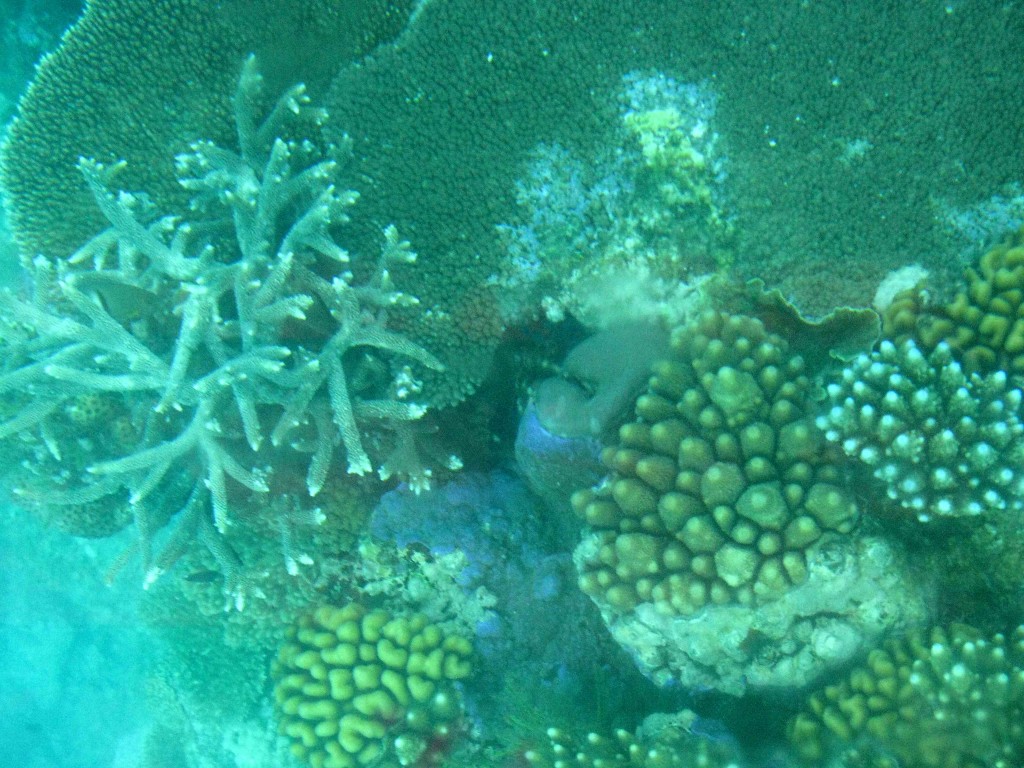 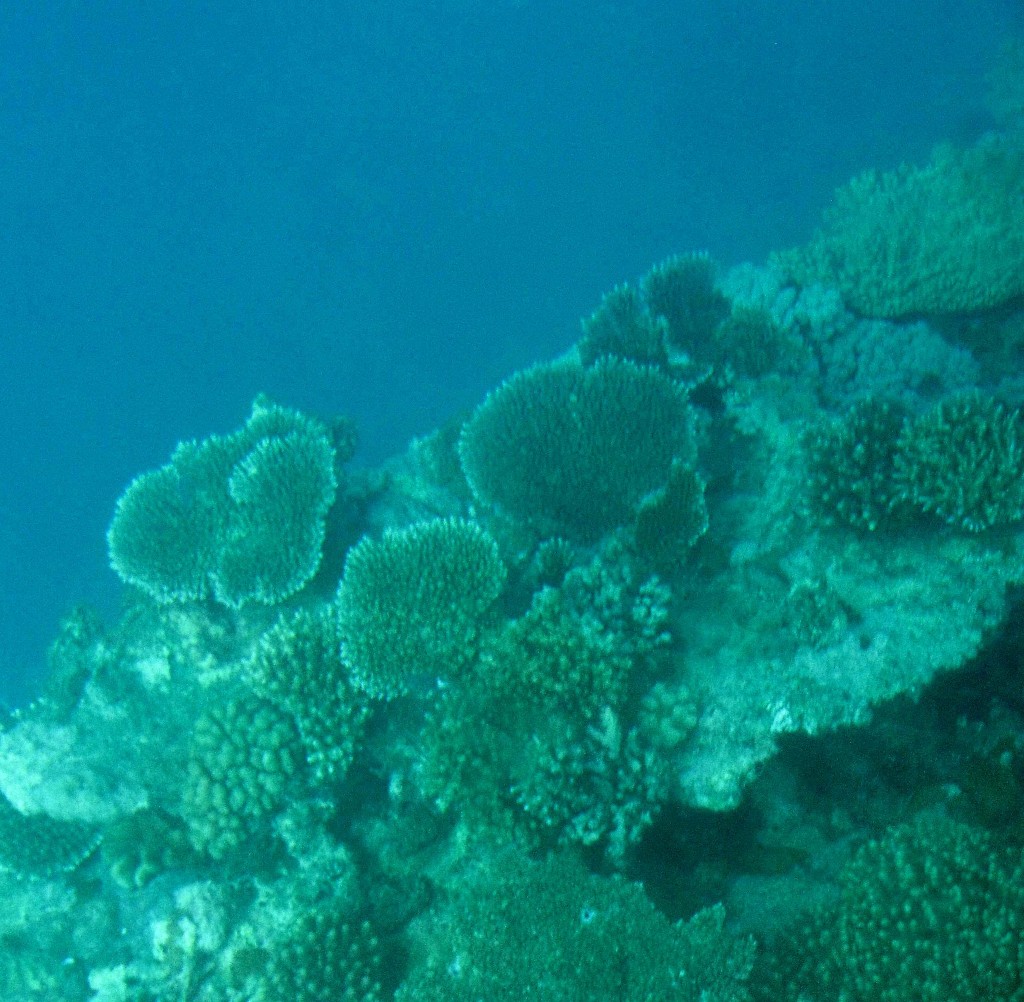 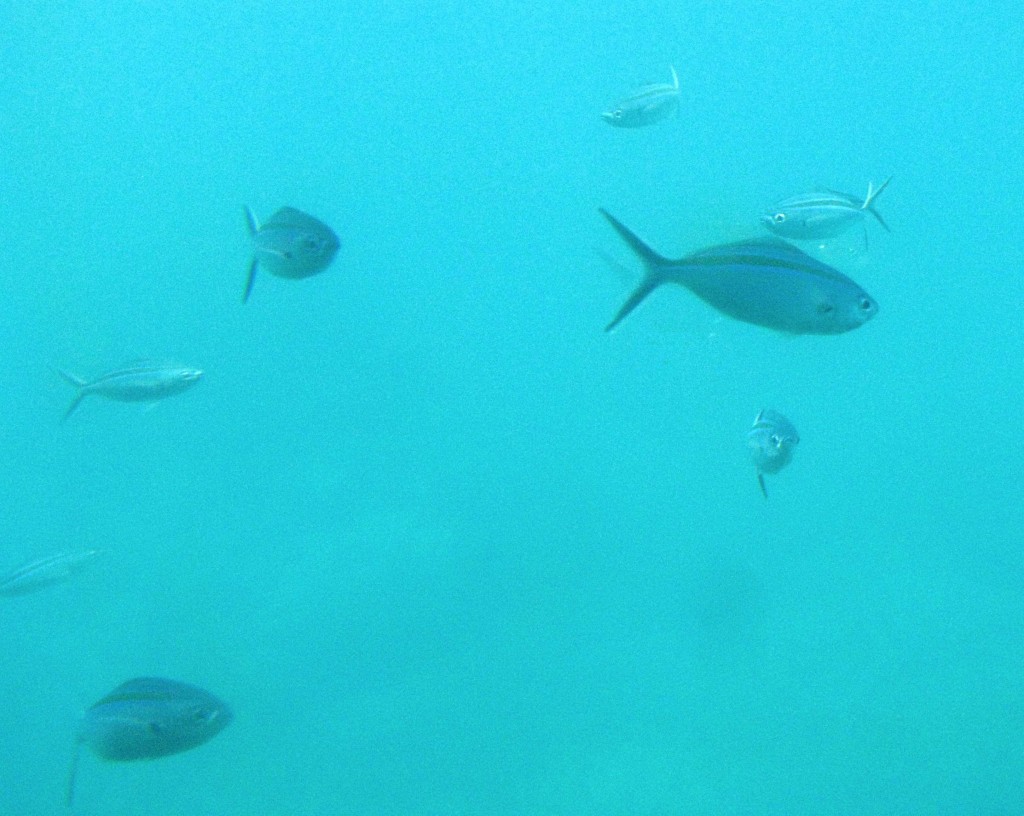 The corals – themselves a symbiosis of jellyfish-like animals and photosynthesizing algae – provided food, shelter, or both for giant clams with thick, wavy lips, sea cucumbers on the coral sand floor, and an astonishing variety of fishes, many of which defended their territories – patches of coral garden – right below us. Eric pointed out foxface rabbitfish with black and white faces adjacent to brilliant yellow bodies; bright blue yellow-tailed fusiliers, a curious red snapper that seemed to be checking us out; zebra-striped sargent-major damselfish; a blackish unicorn fish with a spiky ‘horn’ protruding from its head; blue, deep-bellied fish laced with yellow and possessing the delightful name of ‘sweetlips’; orange-finned anemone fish; and numerous spectacularly beautiful parrot fish coloured in patterns of blue, green, purple, and pink, and possessing ‘beaks’ for nibbling corals. A huge humphead Maori wrasse nicknamed Rocky, who’s friendly with Moore Reef visitors, swam alongside us and rubbed up against us, inviting us to rub his face and lips.

On the heels of our snorkelling tour, Vilis and I donned scuba gear and, under the supervision of our instructor Jim, descended into the reef waters in our first-ever scuba dive. Jim guided us to coral beds, where we touched spaghetti corals and a mushroom coral and floated above gardens of bright blue staghorn coral. He led us along a wall of coral and down to a bed of coral sand, where we stroked a velvety black sea cucumber. Rocky came for another visit, too, again allowing us to caress his soft, blue skin. 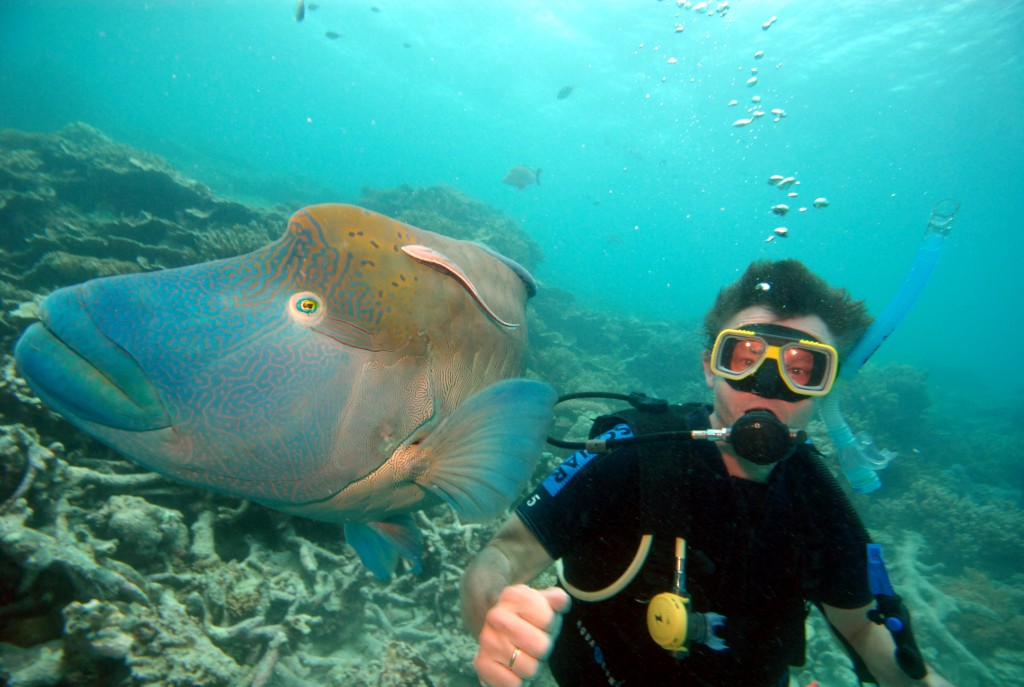 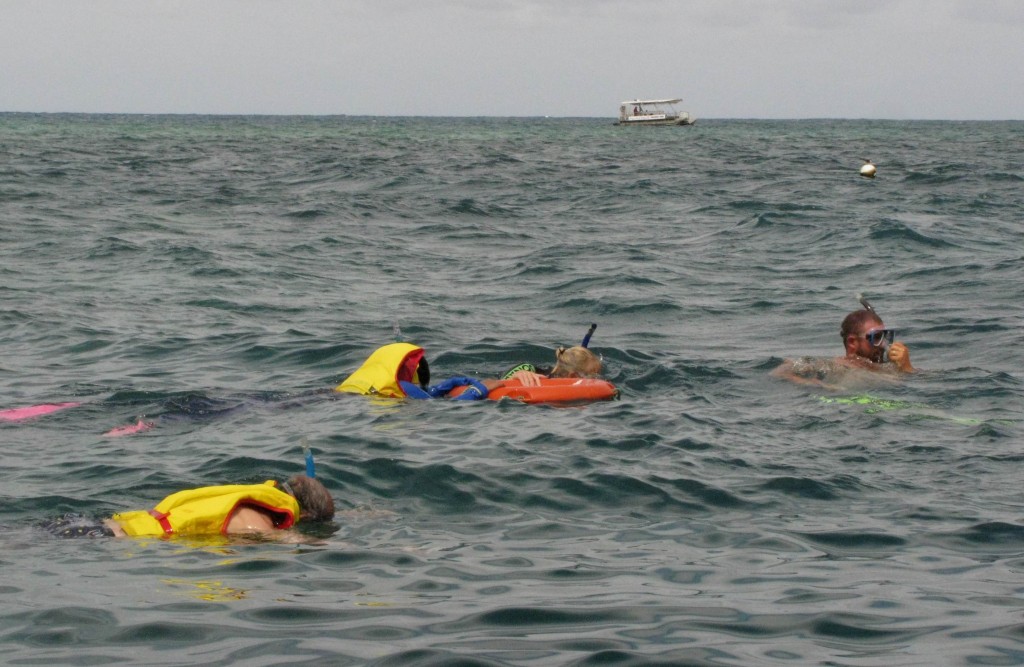 After a hearty buffet lunch onboard the catamaran, Vilis and I observed the reef from yet another angle via a semi-submersible boat with glass-panel walls. The vessel powered away from the pontoon, then slowed to move smoothly over coral gardens, walls, and chasms. Fish swam right next to the glass, and we spotted a white-tip reef shark and sea turtle in deeper water below us. I followed up the semi-submersible tour with one in the pontoon’s glass-bottom boat, while Vilis opted to return to snorkelling. With its shallow draft, the glass-bottom boat allowed passengers to skim over coral gardens at close range and peer down into nooks, crevices, and canyons, offering me the opportunity to photograph the corals with a non-underwater camera.

With only twenty minutes remaining before winding down our reef time, I hurried into wetsuit, flippers, and mask to once again snorkel the reef, first with Vilis, and then on my own. As I floated above the intricate complexity and vivid beauty of this lushest of coral reef ecosystems, I felt utterly weightless, utterly free, as if I’d just received a glimpse of heaven.

When the catamaran chugged away from the pontoon, I looked out at that wavy blue ocean surface hiding so much beauty and biological diversity, and then turned my attention to Reef Magic’s helipad, where sooty and crested terns and common noddies tolerated the catamaran’s approach and then lifted into the air in graceful flight. 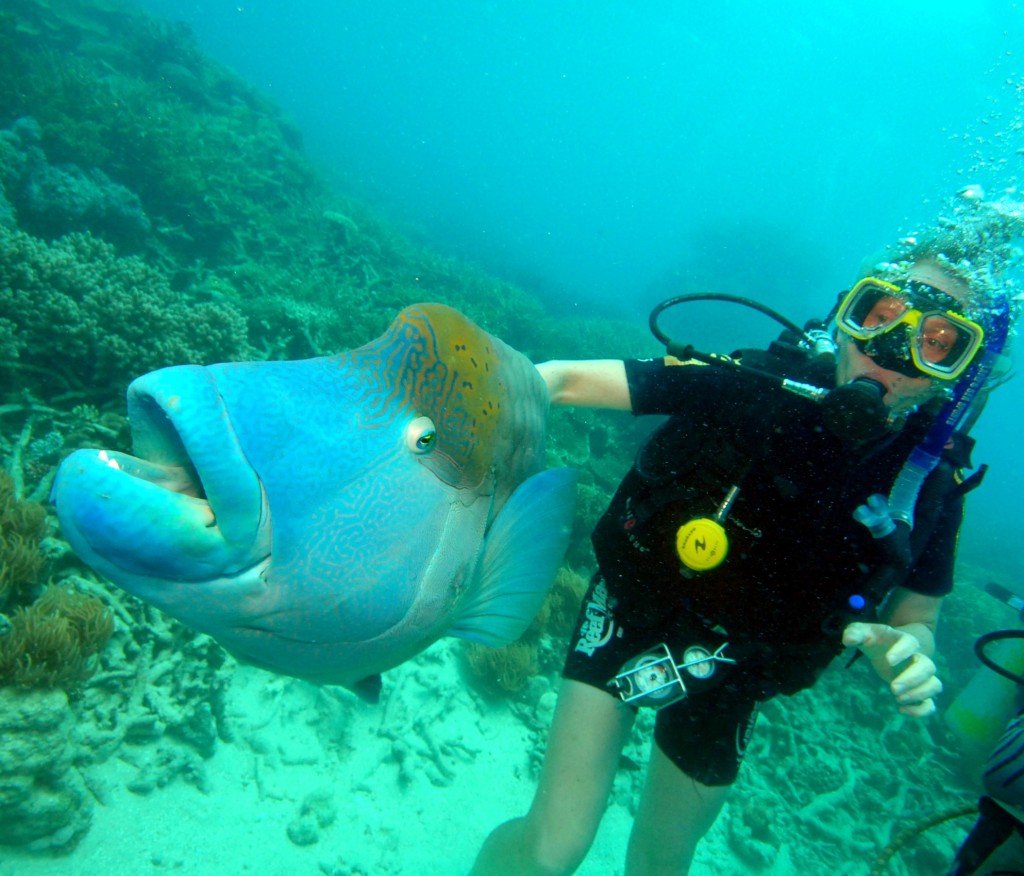 Here I am with Rocky at Moore Reef (photo by Martina, Ocean Blue Productions)