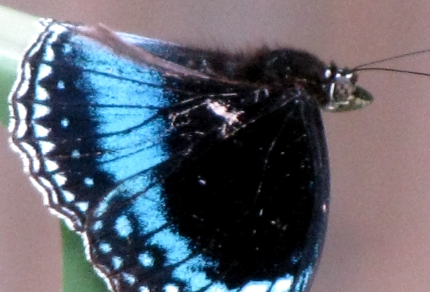 This morning, the humidity was like a weight on my chest that grew heavier as I ran and walked. For the first time since that sauna-day I began my training program, I felt a headache beginning to pound as I moved into my last two intervals. The downpours I ran through last week were preferable to swimming through today’s atmospheric oppression without a snorkel.

After breakfast, a blue-winged kookaburra accommodated me while I snapped photos of it. I think it was as curious about me as I was about it, for it twisted its head this way and that to better observe me, yielding exceptional views of the hefty, pointed beak it uses to dispatch prey. Leaving the kookaburra, I tried my skills with a pair of bush stone-curlews beneath a shrub near the golf course fence. The “thick-knees” were far less co-operative, muttering low hisses at me that rose in volume into growls as I balanced the camera on the top of the fence to record their images before they loped away. I tried other subjects unsuccessfully – myna, blue-faced honeyeater, striped skink, male sunbird, and butterflies. 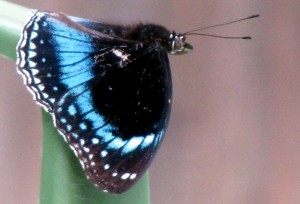 Since the rains began, butterflies are increasingly numerous, as unfortunately are the mosquitoes. While at my writing desk, I’ve observed a pair of orange butterflies cavorting above the neighbour’s yard, several large black butterflies with three white spots on the dorsal surface of each wing floating regally past the glass, and white butterflies flitting among leaves. Today, when I strolled with camera through our yard, a black butterfly with white and orange spots landed on a tiny skink, which scooted hastily away, and black butterflies with the upper surfaces of their wings as iridescent blue as the wings of the kookaburra raced through the foliage. One paused to rest on a wall of the house, its wings fluttering open and closed like a velvet heart beating.

From a James Cook University website, I learned that Townsville is a hotspot for butterflies, boasting 145 species, about 35% of Australia’s total of around 405 species.1 When the range is upped to within 100 kilometres of the Townsville post office, that total jumps to 200 species, almost 50% of the country’s total.1 While perusing the website, which provided photographs and range descriptions for each local butterfly species, I quickly became overwhelmed by colours and common names – skippers, dusk-flats, awls, ochres, grass-darts, swifts, swordtails, triangles, migrants, jezebels, ringlets, knights, lurchers, painted ladies, moonbeams, and wanderers, to list the more captivating. Some of the butterflies had clear wings, some flamed like fire, some were exquisite shades of iridescent azure and aqua. Each seemed like a fragment of some tropical fairytale steaming with romance and treachery. 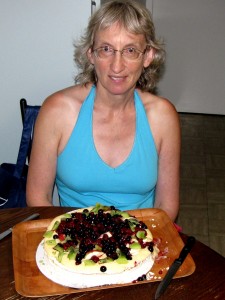 After supper, Vilis and I celebrated my birthday with a dessert of Pavlova or ‘pav,’ an Australian favourite. It’s a light and airy meringue cake, which Vilis topped with rich custard and fresh fruit. Whether Pavlova was invented by an Aussie or a Kiwi is still a bone of contention between Australia and New Zealand, but everyone seems to agree that it was named after Anna Pavlova, a Russian ballerina who toured both countries in 1926.2 Though so light it disappeared on my tongue, the Pavlova nonetheless packed a sweet punch that was refreshingly offset by the custard and fruit.

We followed up dessert with the musical Chess, presented by the Townsville Choral Society at the Townsville Civic Theatre. When we arrived in the parking lot, which was jam-packed with vehicles, we again spotted red-tailed black-cockatoos, sulphur-crested cockatoos, and white ibises roosting in trees right beside the lot. When I saw those birds settling in for the night, I couldn’t help but think of pythons and wonder if any were slithering through the vicinity looking for a meal.

The patio o f the Civic Theatre  was cluttered with theatre-goers enjoying a drink in the hot evening air. They wore everything from shorts and t-shirts to dress pants and shirts or formal gowns. A few children romped on benches on the outskirts of the gathering.

Vilis and I wound through the crowd into the building, past three games of chess in progress in the foyer, and up a set of stairs to the auditorium. Inside, the décor was simple – grey walls and red, upholstered seats, the latter arranged in steep tiers that provided excellent visibility to the stage from any level. Three large chess pieces decorated each wall, black on one side of the auditorium, and white on the other. The stage itself was a black and white chessboard set on a diagonal, with seats for the musicians placed directly behind it. Seating for background singers rose in two angled tiers that presented a slanted but effective view to the audience and allowed space between the tiers for individual performers to make a dramatic, upper-level appearance.

When Vili and I lived in the Yukon, residents laughingly referred to ‘Yukon time,’ meaning schedules weren’t strictly adhered to. Perhaps Queensland has a similar relaxed time frame, for the lights didn’t go down until twenty minutes past the scheduled opening of 7:30 p.m. Just before the performance began, a woman wearing a full-length dress and sparkling sandals plopped into the seat beside me and released a huge grunt. She did the same after the intermission.

The musical had no background sets, other than the chess-board stage, but various scenarios were suggested by still photographs projected onto a huge screen. After an initial few minutes of wondering just what was going on, Vilis and I became immersed in a tale of suspicion and romance set at a world chess championship during the Cold War era. One protagonist was American, the other Russian. The woman in the triangle managed the American player and fell in love with the Russian, who defected to be with her, but ultimately returned to his country and family. The vocalists assumed positions on the stage as though the actions of their lives were moves in the game. The championship games were enacted by dancers that assumed the roles of chess pieces whose moves reflected the punchy aggressiveness of the American and smooth certainty of the Russian, and later, a stunning ballet of the Russian champion defending his title against one of his countrymen. Some of the voices were magnificent; some were mediocre, but as an amateur production, it definitely deserved a check, mate.

After the performance ended, yawning children trudged out of the theatre beside their parents. I heard a few muttered squawks from the trees and wondered if the cockatoos and ibises sleep poorly on concert nights.