At 4:30 a.m., the tropical summer night featured stars sprinkled among wispy clouds tinted orange by Townsville’s lights, bush stone-curlews wailing, spangled drongoes squeaking, and black flying foxes heading to camp after a night of feeding on nectar and fruit. The bats formed an eerie, silent parade, one flapping straight down the centre of Lindsay Street and passing within two metres of me.

At 4:45 a.m., a taxi collected Vilis and me for the drive to the airport, past palm leaves caught against receeding night in still, fringed curves, and frangipanis that resembled dusky ballgowns decorated with white or red bows. From the airport, our view was one of towering, periwinkle cumulus clouds filled with both menace and beauty, poised to dump their guts of rain onto North Queensland. Last evening, the metal roof of our rental house had rattled like a tin drum beneath an onslaught of precipitation, as had the metal roof of the house we’d stayed in on our first evening spent in Australia last December.

Ironically, just as it was thoughts of Australia that sustained us during hectic preparations for our departure from Nova Scotia fifty weeks ago, it has been thoughts of cool Canada which have provided the carrot at the end of a steamy Townsvillian stick during the past weeks here in the tropics of Australia. And where this red continent beckoned to us from afar as an incredible adventure awaiting us, now after a year of travel and Aussie life, we yearn to return to our permanent home. All this is as it should be – excited to leave our home, and excited to return.

As we walked onto the tarmac to board a QantasLink flight to Cairns, I noticed the Many Peaks Range dead ahead and was reminded of mozzie onslaughts and capricious storms while hiking the peaks and Cape Pallarenda, as well as a wild ride along an overgrown track at the base of the peaks, where Vilis’s and my bicycles sloshed through swamps and pushed through grasses towering above our heads. Today, on our last day in Australia, Townsville looked green and vibrant due to unusually heavy rains during the past three months; it was definitely not the dessicated, dusty city of our arrival, which had exemplified its dry season nickname of Brownsville.

As the prop plane lifted into the air, I looked out over the Townsville Town Common Conservation Park’s expanses of green-brown vegetation smeared with large patches of blue water and imagined magpie geese foraging in the wetlands, their big butts tipped to the sky. We ascended over the Many Peaks Range and Shelley Beach, where we had gone bush, and then out over Cleveland Bay and Magnetic Island and smaller continental islands, the deep blue water surrounding them lit by early morning sun. I recognized Nelly Bay and Horseshoe Bay on Maggie and thought of bushwalking The Forts Track, with its koalas. Cumulus clouds billowed upward below us like mounds of pristine mashed potatoes suspended in air, offering an intriguing view of clouds I normally only see from below. Sweet-smelling, vapourized insecticide puffed into the jet cabin to kill all the pesky insect pests passengers might be carrying, causing Vilis to joke that this was Australia’s new form of population control. (He was referring to a plenary lecture presented at the Ecological Society of Australia meeting in Canberra last week, in which Dr. Corey Bradshaw stated that Australia is overpopulated.)

The plane swung out over the Coral Sea and headed north, passing Hinchinbrook Island with its northern mangrove swamps invaded by reaching fingers of ocean. Then cloud obscured my view, periodically relenting to allow me to spot pale turquoise coral reef patches in that greatest of coral reef ecosystems, the Great Barrier Reef, where Vilis and I snorkelled and dived amid an incredible diversity of brilliantly-coloured fishes and corals and patted the smooth, blue lips of a humphead Maori wrasse. Sections of Queensland coastal plain backed by thrusting ranges of forested mountains – perhaps Girringun National Park and the elegant beauty of Wallaman Falls, and Wooroonooran National Park, with its endangered tree kangaroos – appeared as snapshots of scenery screened by cloud. As we neared Cairns, mysterious headlands jutted into teal-hued ocean waters, sending my thoughts to the Daintree – that magnificent reservoir of diverse rainforest vegetation and wildlife –  hidden beneath the clouds somewhere to the north. At Cairns, murky rivers bordered by bands of vivid green mangroves emptied into the ocean, and brooding headlands etched dark shapes against sky and water south of the city. The city itself was besieged by cloud

As Vilis and I walked to the international terminal around 7:30 a.m., I spotted a male willie wagtail performing parabolic courtship flights over a female, and a brown honeyeater foraging for nectar in lush, red parasols of blossoms. White-breasted woodswallows hawked for insects overhead, and the distinctive rolling burrs of rainbow bee-eaters, as well as calls of peaceful doves, nutmeg mannikins, figbirds, house sparrows, and spotted turtle-doves penetrated the air.

Within the terminal, Christmas decorations spoke of an Aussie preference for hot colours – pinks, purples, electric blues – rather than the classic Canadian Christmas colours of rich red, deep green, and snow white. While I waited with our bags, Vilis caught a taxi to collect the three suitcases we’d shipped to Cairns by bus on Monday to avoid QantasLink’s shocking $10 per kilogram excess baggage fee (only one check-in luggage allowed). Then we both hit the wall, utterly exhausted. An Aussie breakfast of fried eggs, toast, and lashings of ham and bacon revived us somewhat. The platefuls of food looked impossibly big, but we ate every morsel.

At 12:25 p.m., we lifted into the air above Cairns on an Air New Zealand jet. My last glimpses of Australia were of beige sand, teal blue ocean, and jagged mountain ridges furred with dense rainforest. Then Vilis and I were carried out over the Tasman Sea and eventually to Auckland, arriving in New Zealand’s ‘City of Sails’ at 8:10 p.m., with daylight still bright above the horizon.

Located on low, rolling hills, Auckland spanned a narrow neck of land separating the Tasman Sea and Pacific Ocean. Downtown towers and residential roofs glinted in the evening sun, and sailboat sails gleamed on Waitemata Harbour. Beyond the city lay rolling hills cloaked with grass and patches of trees. Those hills, I thought, could be the bones of Te Ika a Maui, ‘The Fish of Maui.’ Māori legend tells of how Maui, an ancestral god-man, yanked the North Island from the geat southern ocean on a hook made from his grandmother’s jawbone and baited with his blood. For the next eight days, Te Ika a Maui would be ours to explore. Farewell, Australia. 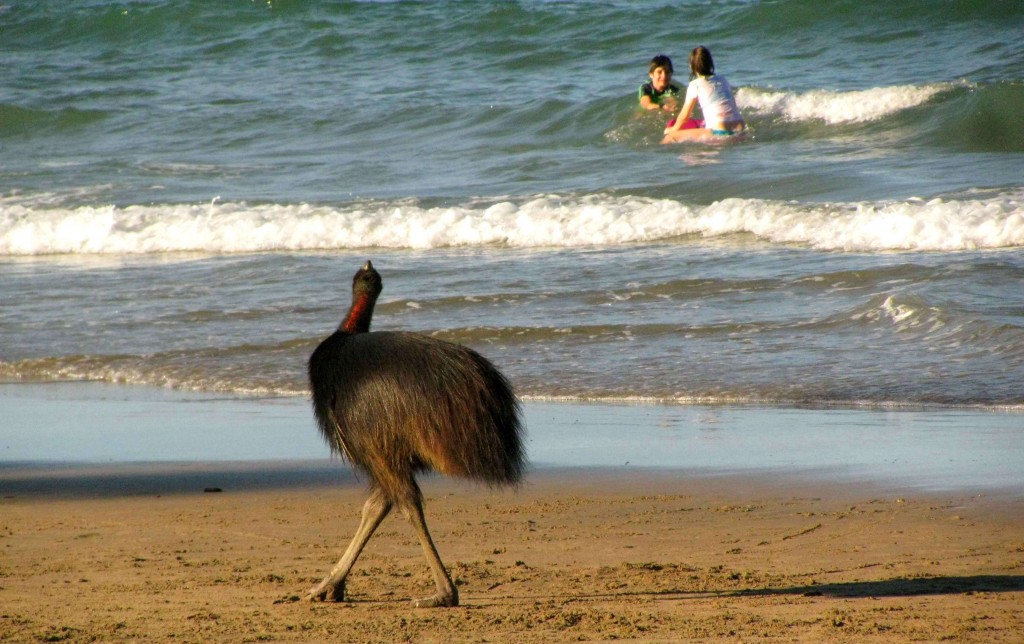