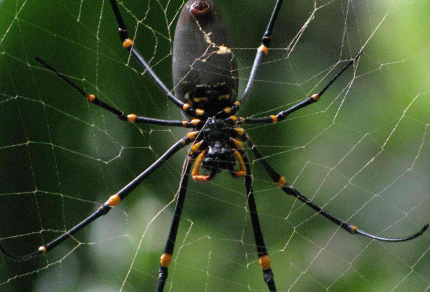 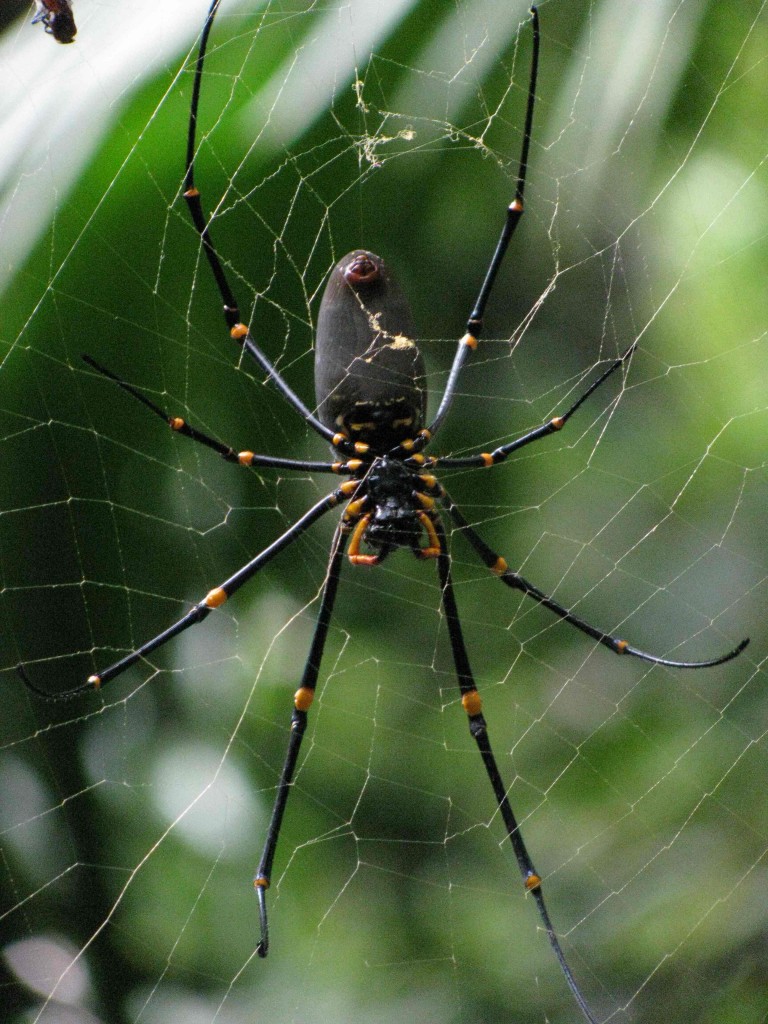 Australia is home to an impressive array of spiders, some of them, like the Sydney funnel web spider, dangerously venomous to humans. Golden orb web spiders, also called golden orb weavers, on first encounter certainly conjure up  images of potential danger, but are generally harmless to humans.1 These spiders belong to the genus Nephila. The females construct large, roughly circular webs out of silk that shows a golden sheen in the sunlight – hence the name golden orb web spider.2 Female golden orb weavers grow as large as 15 centimetres in total length, while males are tiny individuals often less than a centimetre long that help themselves to prey caught by females.1 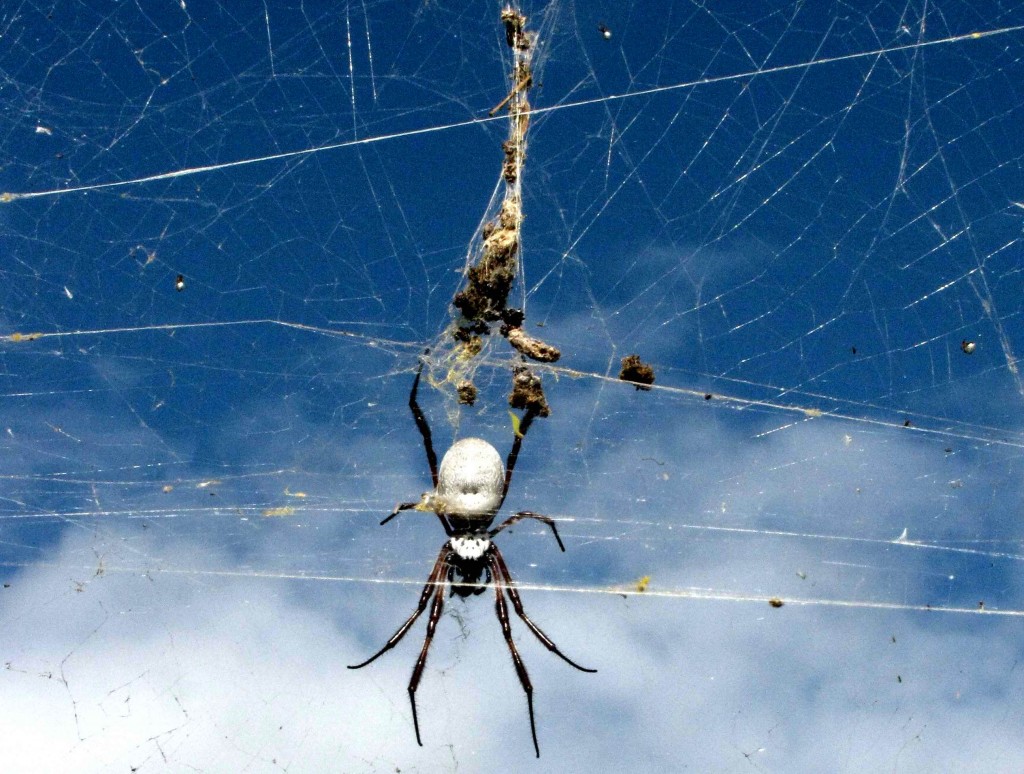 Vilis and I first encountered golden orb weavers in mid-April beside Ross Lake, where a female had strung her asymmetrical web between two trees.  Two miniscule males occupied outer reaches of the web, and the centre was littered with the debris of insect meals.

In early May during an excursion to the Atherton Tablelands, Vilis, Janis, and I often bumped – sometimes quite literally – into the huge, sticky orbs of these spiders constructed beside or across rainforest trails at Lakes Eacham and Barrine in Crater Lakes National Park, and on the path to McNamee Creek in the Misty Mountains. I also observed orb weavers in Licuala State Forest Park where we sought cassowaries in August, and on Hinchinbrook Island in mid-September. Thus, they’re fairly common. 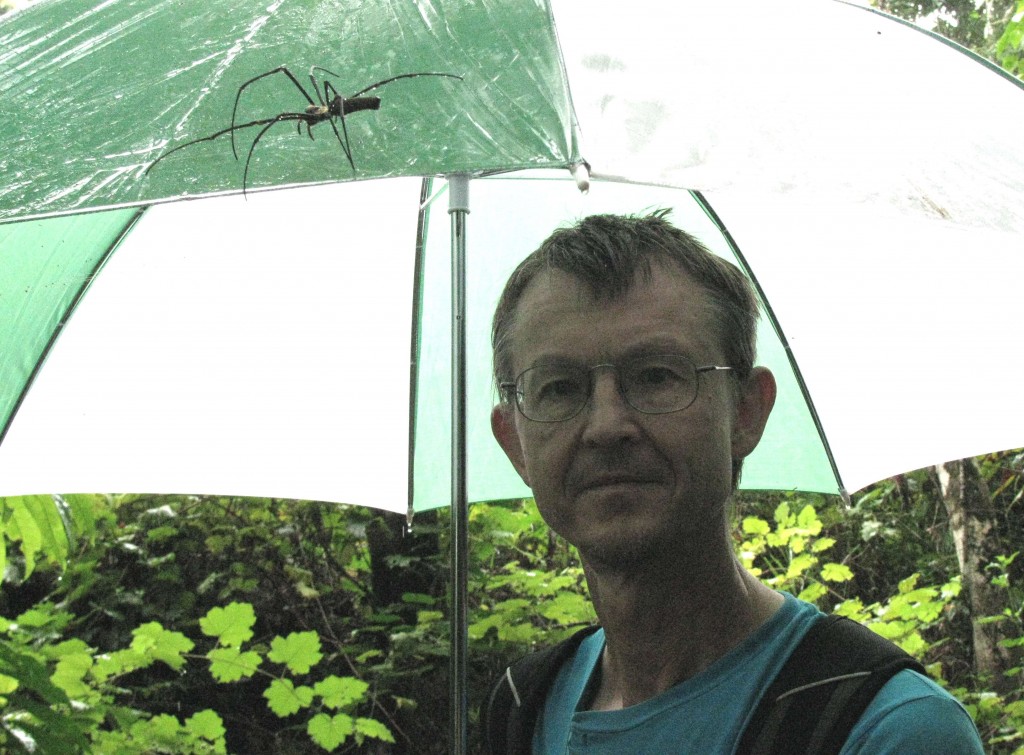 Always impressive, the female golden orb weaver’s large web is designed to capture insect prey, which the female kills with a poisonous bite from her fangs and then wraps in silk.1 Once the poison has liquified the prey’s internal organs, the spider sucks them out.1 Occasionally, larger animals become entangled in the webs (which are extremely strong) and end up as dinner for an orb weaver. A photograh  and story published in the Townsville Bulletin showed a golden orb web spider feeding on a brown honeyeater that had flown into a web and been quickly dispatched by the resident female spider. Within 30 seconds of landing in the net, the bird had been killed and bound with silk. The next morning, the bird’s head was missing, presumably chewed off by the ambitious spider, and when she had finished her feed, she broke the web holding the honeyeater, dropping its weighty remains to the ground.1 Only in the tropics, I say. 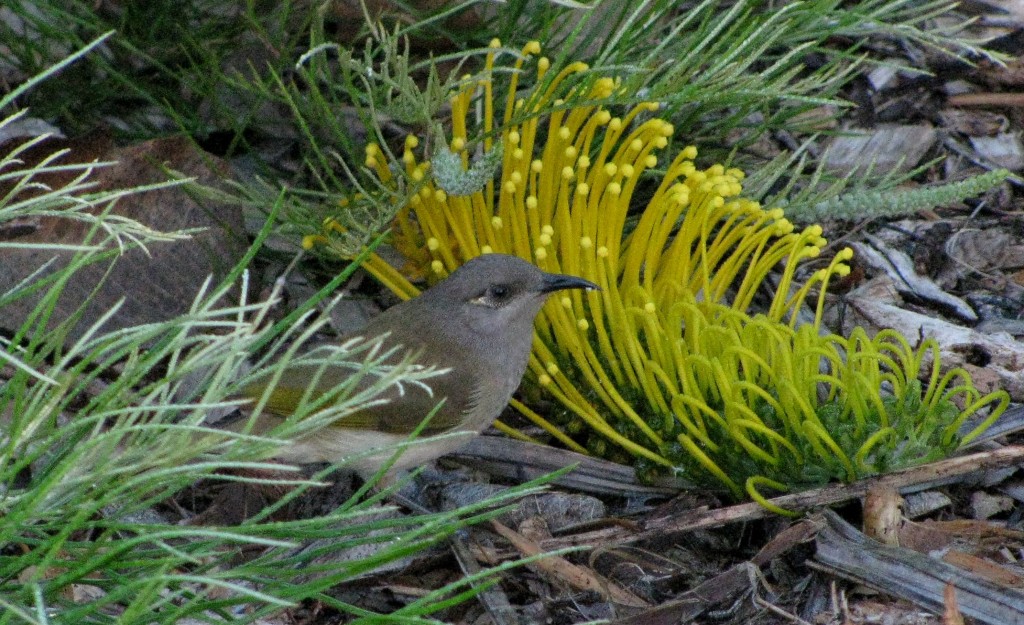