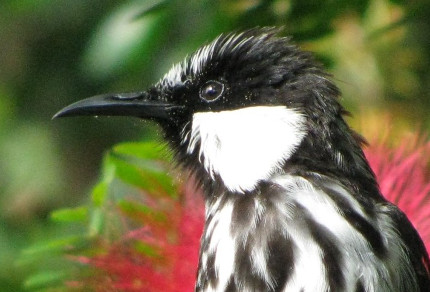 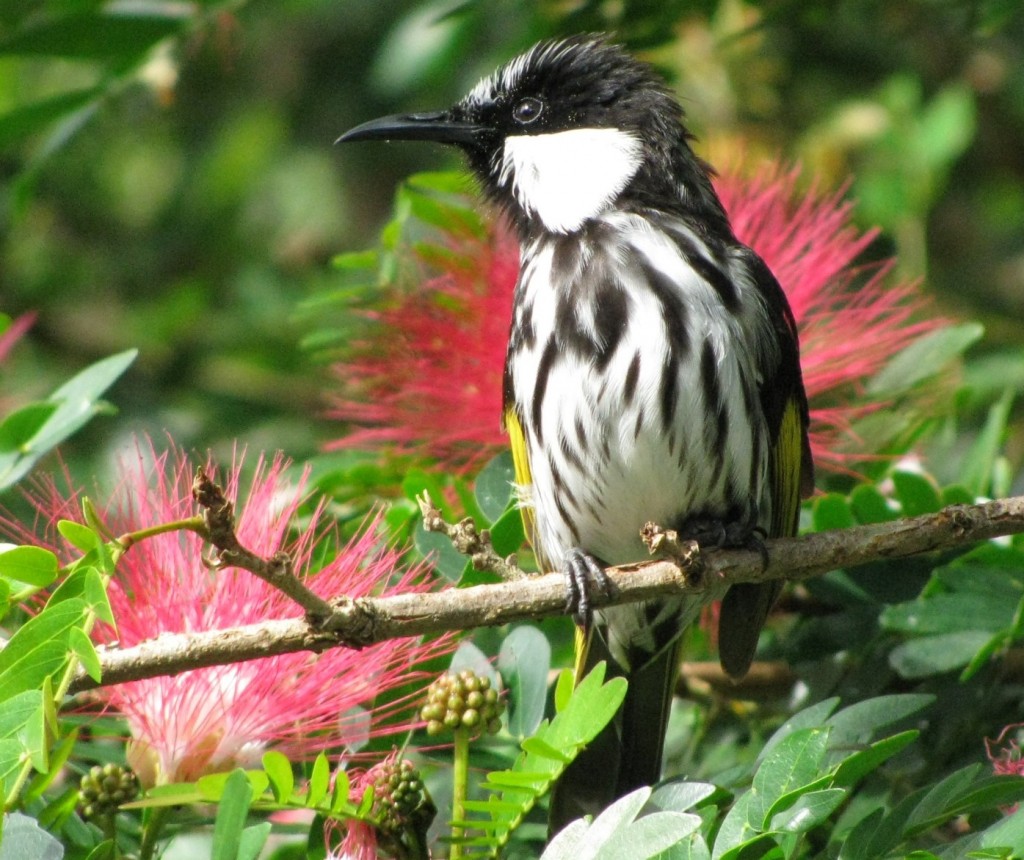 With less than a week remaining before the vernal equinox, a late winter storm has again wreaked havoc in Nova Scotia, dumping freezing rain, ice pellets and snow during the past two days, rendering roads slick and greasy. This morning, I returned from my run with sneakers sodden from slogging through snow and slush, and my jacket and baseball cap rimed with ice, courtesy of freezing drizzle. The woods were hushed, only a crow, robin and blue jay calling a few notes, but jays, dark-eyed juncos, evening grosbeaks and black-capped chickadees flocked to my birdfeeder after I refilled it with sunflower seeds on my return home. Earlier in the week, I also noted American goldfinches, mourning doves, and raspberry-hued purple finches at the feeder. Two months from now, I’ll be hanging red flower-decorated feeders from my porch to attract the only North American birds specialized to feed on flower nectar, the hummingbirds. Five hummingbird species migrate northward into Canada each spring to breed, but only one, the ruby-throated hummingbird, occurs in Nova Scotia. 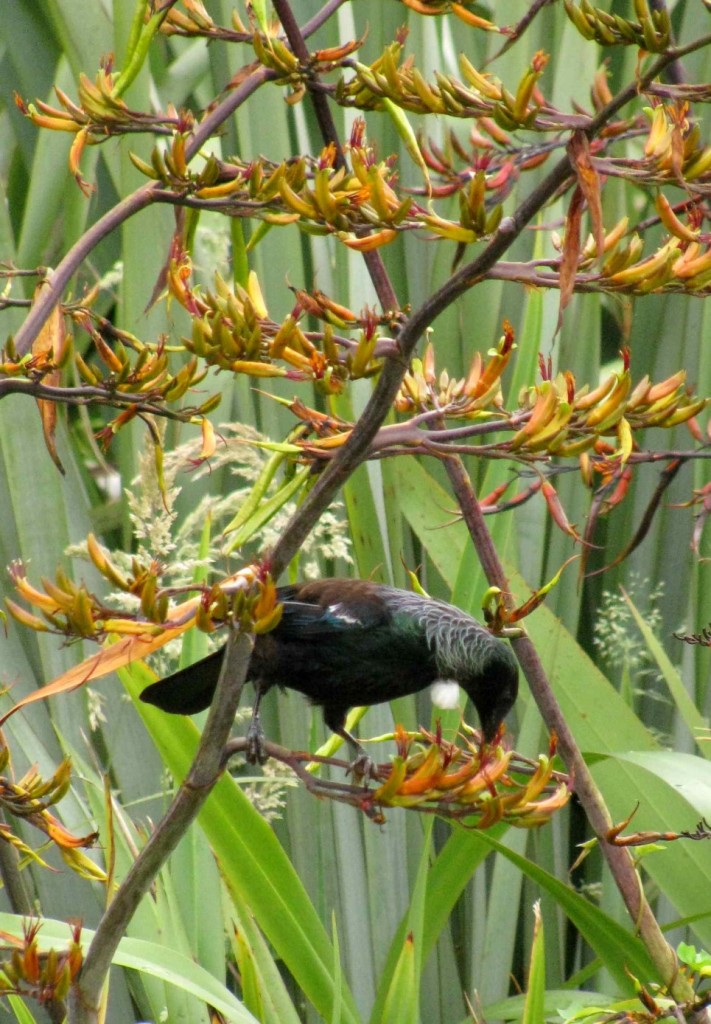 On the far side of the world, however, nectar-feeding birds are a common sight and vital component of forest ecosystems. Although nectarivores occur in several Southern Hemisphere bird families, most belong to the familiy Meliphagidae, the honeyeaters. This family includes over 180 species occurring in Australia, New Guinea, New Zealand and other South Pacific islands. In addition to consuming flower nectar with the aid of partially-rolled and brush-tipped tongues, the honeyeaters also hunt small insects and eat fruit.

During a sabbatical in New Zealand, I observed the two Kiwi honeyeaters, the bellbird and tūī, as well as the extremely rare stitchbird, which was then but is no longer classified as a meliphagid. The stitchbird is extinct in most of New Zealand, but survives on predator-free offshore islands such as Tiritiri Mātangi, a scientific reserve north of Auckland. My family and I watched a gorgeous male at a feeder in the forest on Tiritiri Mātangi, his hooded black head accented by a strip of erectile white feathers behind his eye. 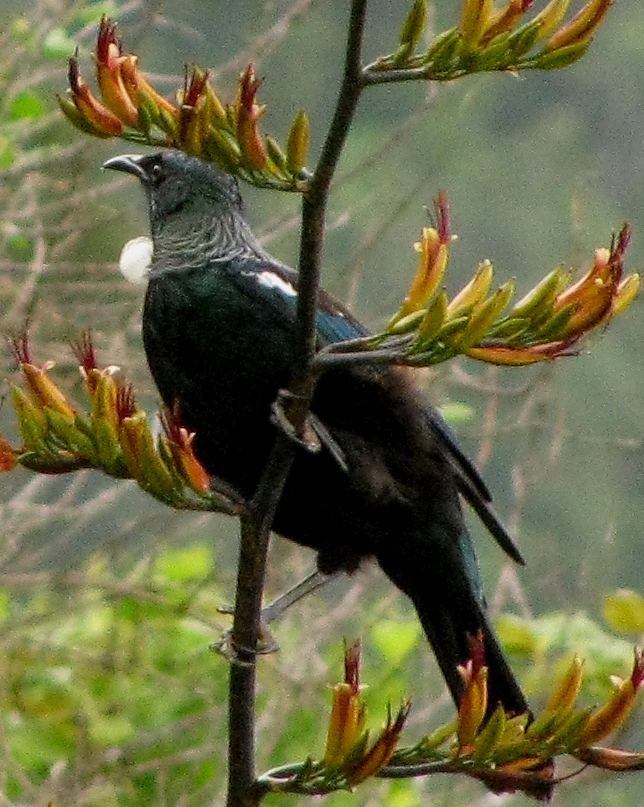 Fortunately, bellbirds and tūī are still abundant and widespread on both the North and South Islands of New Zealand. I’ve watched tūī feeding on the nectar of flowering flax and shrubs and trees, including kowhai, New Zealand’s national tree, with its yellow pea-like blossoms. Although I’ve seen bellbirds, with their greenish-grey and yellow plumages, flitting in forest canopies and heard the males’ ringing-the-bells-of-heaven calls, I’ve only ever observed one bellbird feeding. This was a male drinking honeydew, the clear sweet droplets of exudate produced by a sap-guzzling insect, the sooty mould scale. Both bellbirds and tūī play a key role in the survival of New Zealand’s three endangered mistletoe species, the honeyeaters having learned to twist open the mistletoes’ flower tips to get at nectar, and pollinating the mistletoes in the process. 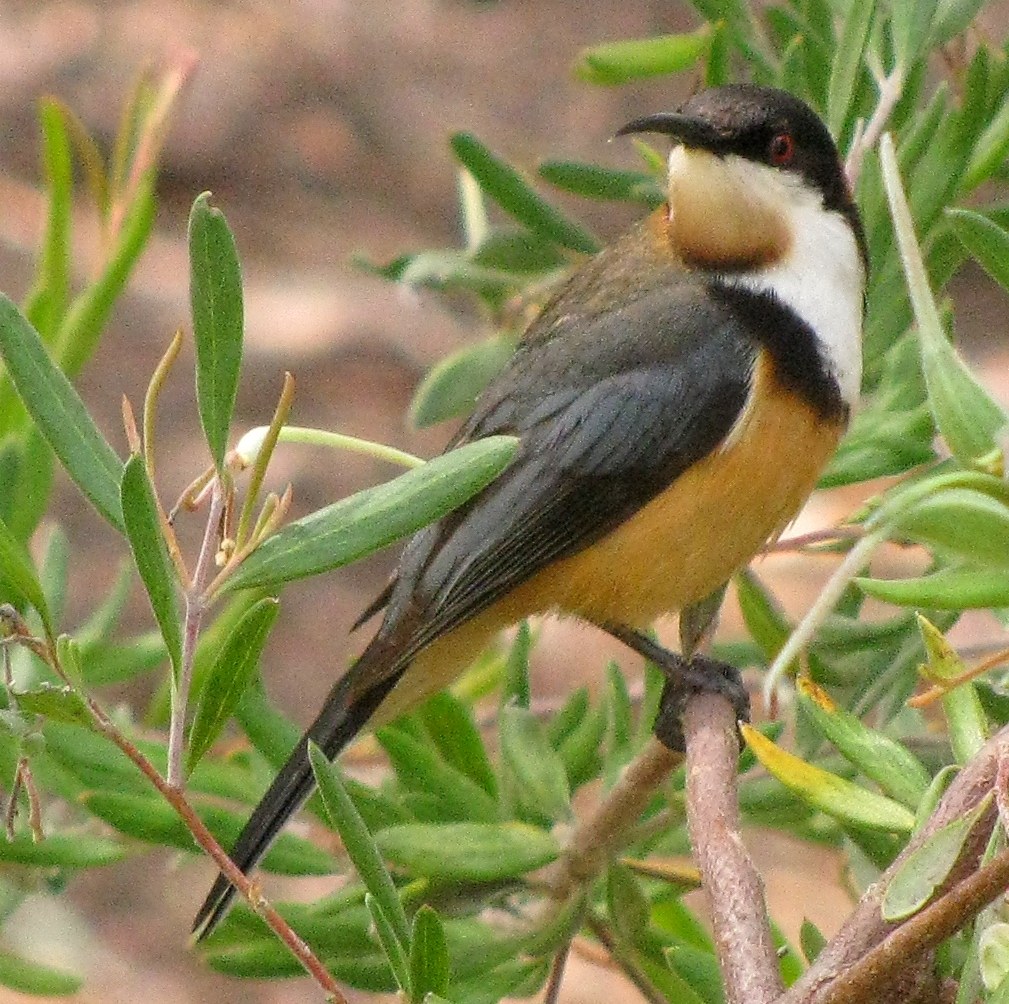 During a more recent sabbatical in Australia, I observed 36 species of honeyeaters, about half of the country’s total number of meliphagids. Australia’s abundance of nectarivorous birds, as well as the occurrance of nectar-eating bats and the tiny honey possum, are intimately connected with the country’s development of an extensive flora of flowering trees and shrubs, notably over 700 species of eucalypts, as well as banksias, grevilleas and heaths. Like their counterparts in New Zealand, the Australian honeyeaters are vital components of native ecosystems, ensuring pollination of these flowering plants and distributing their seeds. 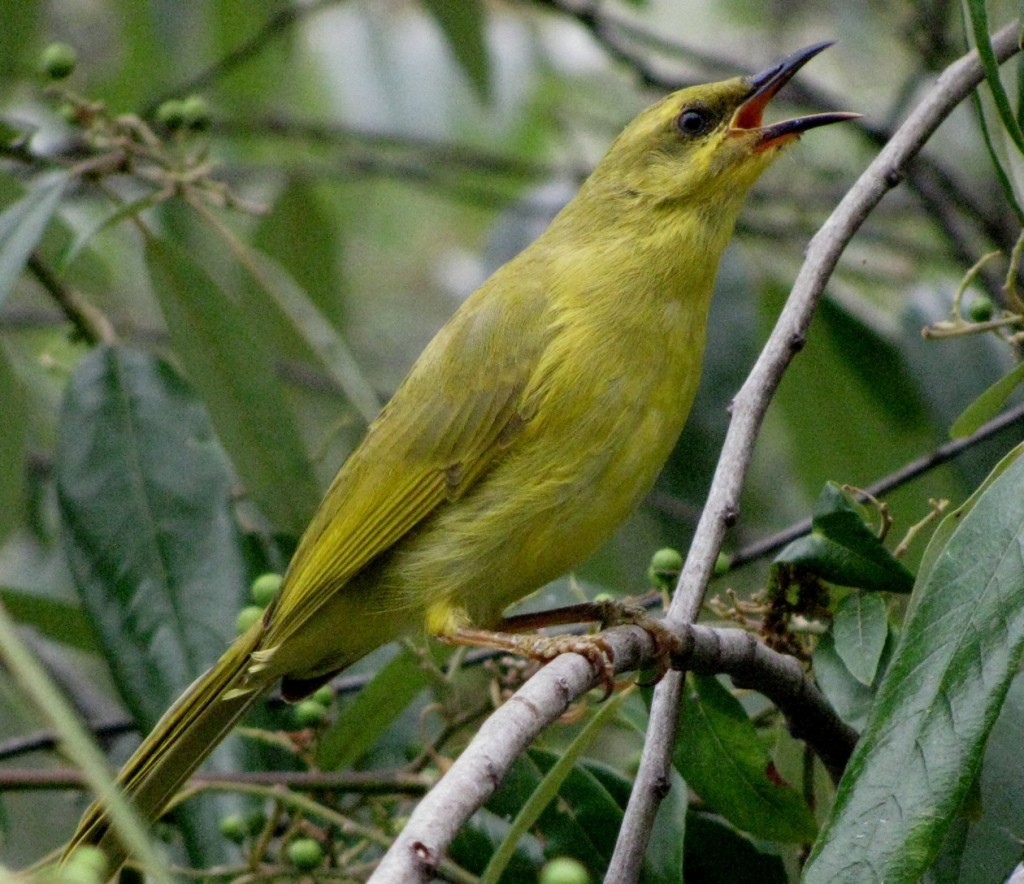 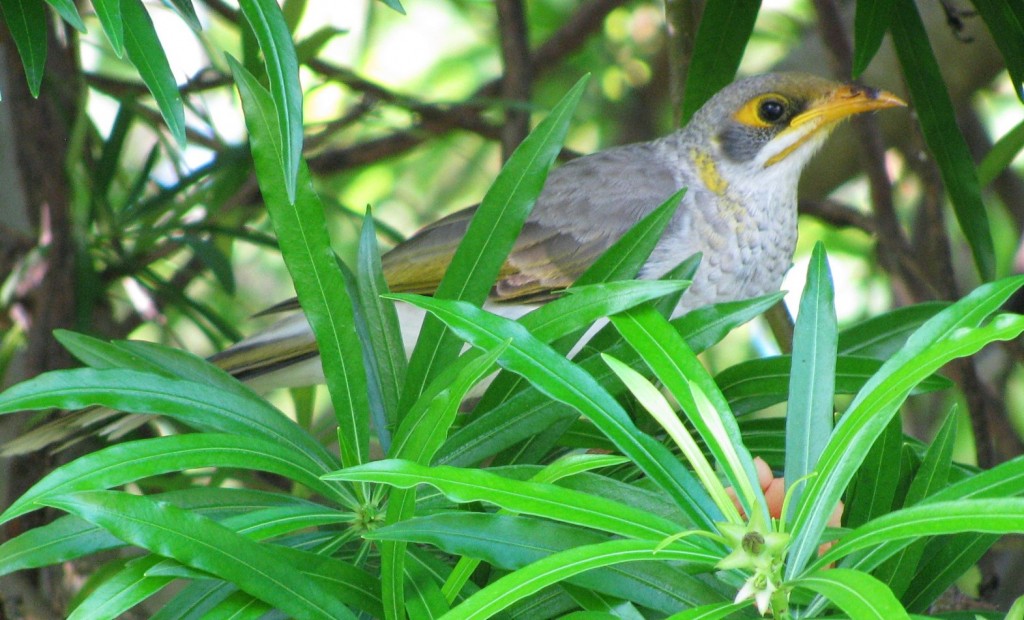 Honeyeaters occupy all of Australia’s terrestrial ecosystems, with assemblages of various-sized honeyeaters exploiting different niches in any given habitat. In Townsville, where Vilis and I were based, I routinely saw a half-dozen honeyeater species in close proximity to each other in a riverside park, the Ross River Parkway. These included large yellow-throated miners, blue-faced honeyeaters and noisy and helmeted friarbirds, as well as medium-sized yellow and white-gaped honeyeaters, and small brown, rufous-throated, black-chinned and white-throated honeyeaters. 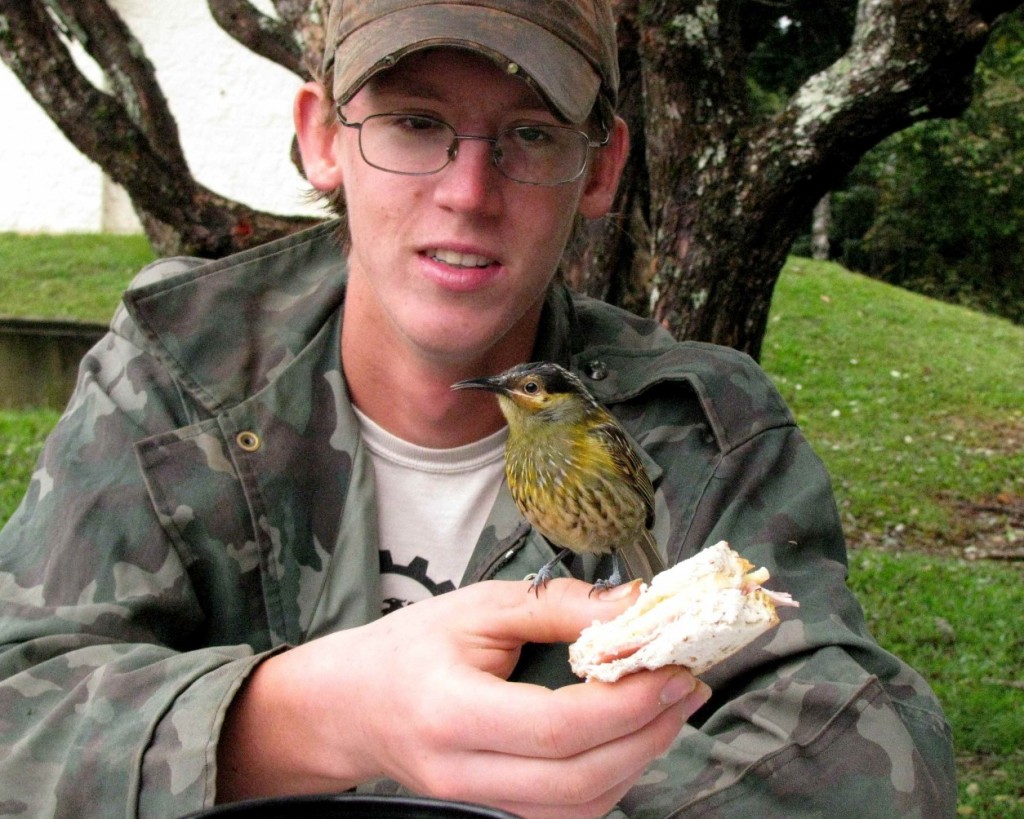 My Son Jānis and a Macleay’s Honeyeater (© Magi Nams)

The wet tropical rainforests of North Queensland supported assemblages of honeyeaters that included Lewin’s, yellow-spotted, bridled, graceful and Macleay’s honeyeaters, one of the last checking out my son’s sandwich when we ate a picnic lunch in Paluma’s village green. Mangroves along the Queensland coast provided habitat for varied and mangrove honeyeaters, and I found little friarbirds and brown-backed and dusky honeyeaters in Queensland woodlands, with yellow-faced honeyeaters in the lush forests of Eungella National Park. 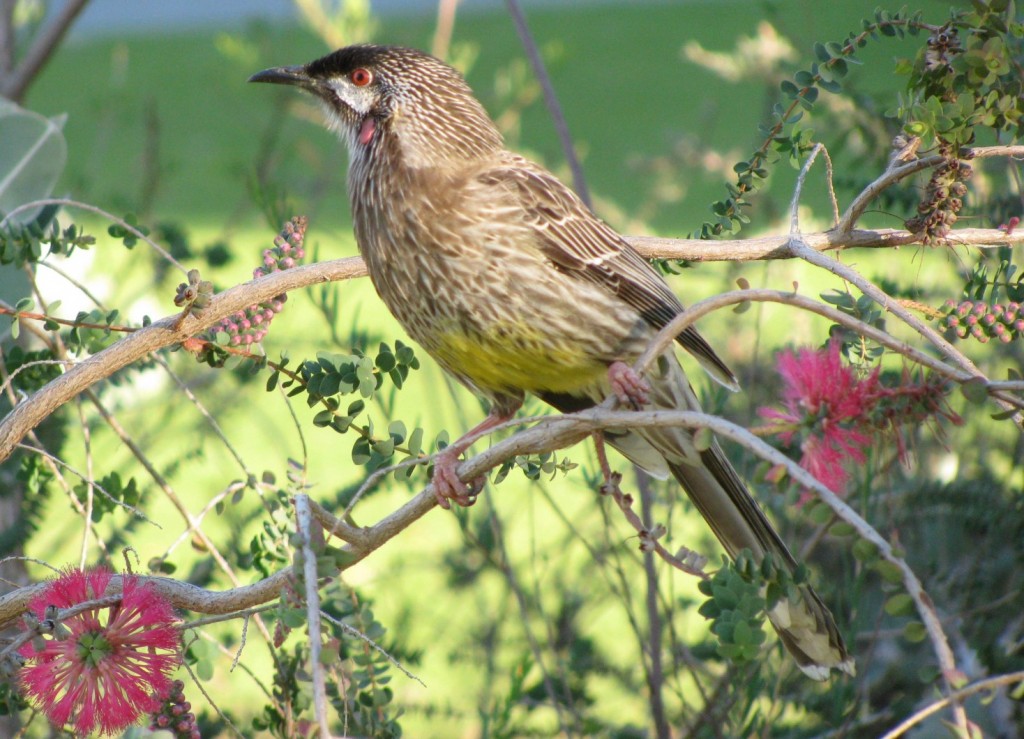 Spiny-cheeked, singing, grey-headed, pied and white-plumed honeyeaters sang and foraged in flowering trees in the desert around Alice Springs, feasting on the abundance of nectar produced as a result of an abnormally Big Wet. Vilis and I noticed red wattlebirds in capital city gardens in Perth and Melbourne, respectively, and observed and heard (‘kwock!‘) numerous little wattlebirds feeding in banksia shrubs in Freycinet National Park in Tasmania. I spotted New Holland and black-headed honeyeaters in Tassie woodlands, and on our penulimate day in Tasmania, I threw up my arms in victory after identifying a yellow wattlebird hacking and coughing and making puking noises high in the canopy of the majestic swamp gums on Tall Tree Walk in Mount Field National Park. 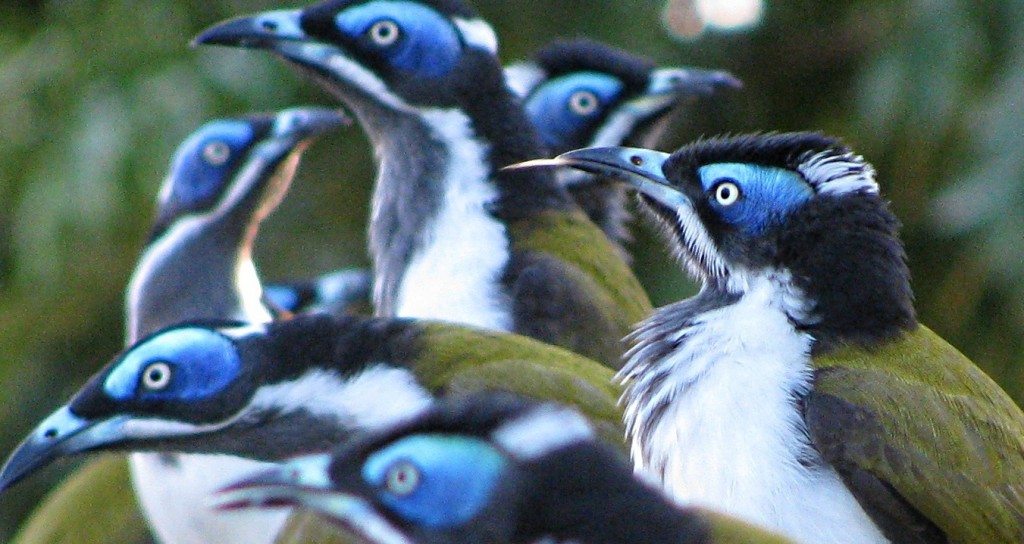 A number of honeyeaters possess intriguing plumage features, for example the tūī’s white feather balls or poi hanging from its neck, and the stitchbird’s erectile white ‘stitch.’ Others, like the red and yellow wattlebirds, have colourful pigmented wattles dangling from their cheeks. Still others possess bare patches of skin on their heads, like the friarbirds with their black ‘masks.’ Each of the New Zealand honeyeaters captured my heart in its own way, but I’d have to say that Australia’s blue-faced honeyeaters knocked my socks off with their sky-blue facial skin (green in juveniles). One day in Townsville, I was wishing and hoping that one of a flock of blue-faces feeding in a flowering shrub would remain motionless long enough for me to photograph it, but had no success. Just as I began walking away, not one but seven of the suddenly curious honeyeaters landed on a fence and stared at me, their blue facial patches more exotic than any makeup I could imagine.