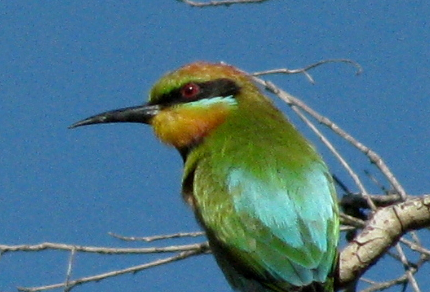 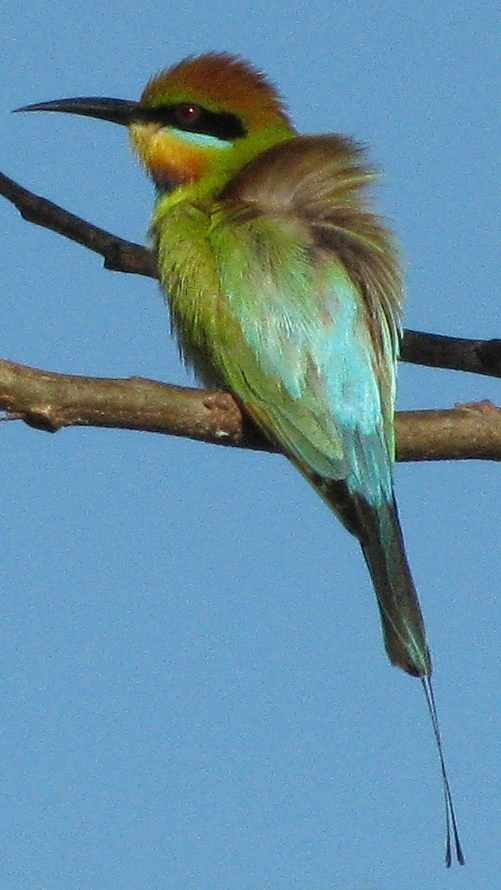 At 5:10 a.m. I set out cycling/birding, the sky brightening with the incipient sunrise. Curved palm leaves formed green, fringed screens erected against pale light. The Townsville summer dawn had a taste of freshness, but I knew just how fast that sweet shadow of coolness would be licked from the air by the Australian sun. I rode first past the dewy swales of the Townsville Golf Club, with rainbow lorikeets racing overhead like a squadron of rowdy jet fighters silhouetted against the sky, and then into and through Bicentennial Park. Towering, rosy-tinted cumulus clouds billowed over the eastern horizon, thunder rumbling from their grey bellies. I spotted a flock of foraging white ibises on the park lawns and a larger flock of little black cormorants in flight, following the broad, serpentine Ross River.

The machine-gun chatter of masked lapwings pasted sound shrapnel against my ears, this vocalization tumbling from a cornucopia of avian sound which included the buzzing mating calls of golden-headed cisticolas that flicked wings while singing, the high-pitched squeals of scaly-breasted lorikeets, the nasal honks of skeins of magpie geese in flight, and the cozy, confiding twitterings of nutmeg mannikins perched on tall grass stems. It all seemed so intimate, so utterly alive. Near Queen Street, I watched a mixed avian flock – including rainbow bee-eaters, white-breasted woodswallows, helmeted friarbirds, spangled drongos, white-gaped honeyeaters, and even mynas – hawking for insects above a few trees at the edge of Ross Creek and wondered how many Townsvillians are aware of the fact that their city and its surrounds are a birder’s paradise that would rival any in the world.

After returning through Bicentennial Park, I cycled west in the Ross River Parkway past all my old haunts. Magpie-larks cruised alongside me as I rode, and peaceful doves serenaded me with gentle coos. I heard the muscled power of the river pounding over Aplin’s Weir from a distance, its frothing waters swelled by nearly daily downpours. Brown honeyeaters called their strident, ringing notes, and a male mistletoebird foraged in mistletoe, its neon-red throat and undertail coverts presenting a brilliant contrast to the black and white of the remainder of its plumage. I paused to walk quickly through the Ross River Bush Gardens, past the she-oaks in which a pair of tawny frogmouths had regarded me through slitted eyelids half a year ago, past a little shrike-thrush which eyed me curiously, and out into the eucalypt and paperbark lawns that had reeked of boiled potatoes when the paperbarks had blossomed, attracting to their bounteous nectar hordes of ecstatic, gluttonous lorikeets, friarbirds, and honeyeaters. I continued cycling, past the deep richness of the Palmetum with its barking owls, and beneath the luxurious shade of rain trees. Thick, red frangipani blossoms lay tossed onto the path by recent rain, their lush beauty yet another treat of the tropics.

After that soul-refreshing, early morning ride, I returned to an essentially empty rental house, and Vilis and I resumed our whirlwind of packing and cleaning, which oscillated between focused and focused-with-frenzied-intensity. In late afternoon, we passed our exit inspection with flying colours. In mid-evening, we lay between thin sheets on our inflatable camping mattress, which would tomorrow become yet another donation to Salvo’s. Black flying foxes squabbled in feeding trees across the street, house geckos belted out ‘chuck-chuck’ calls that seemed so much larger than the geckos themselves, and – like ghosts haunting the nearby golf club – bush stone-curlews wailed out their haunting cries. They sounded half-mad with sorrow. I knew I would miss them.